A Molecular Brace for Sprains 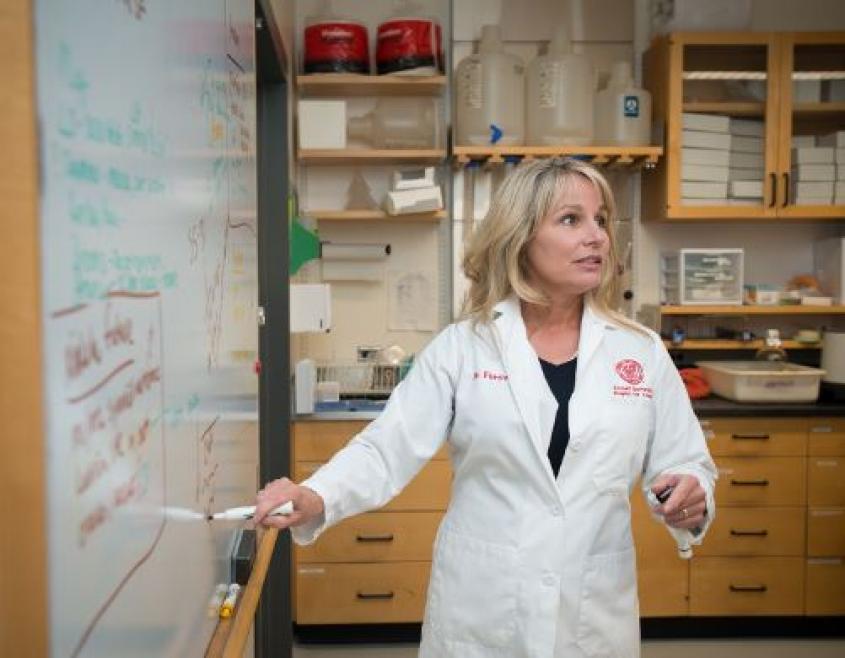 Rest, ice, compress and elevate is the advice that most people get after a sprained ankle from tripping on stairs or falling on the soccer ﬁeld. These measures help alleviate the pain, but no clinical data backs up this advice as the best treatment for healing or long-term joint health.
Dr. Lisa Fortier, a professor of large animal surgery awarded the James Law professorship, is looking for new treatments for sprains. She is partnering with Dr. Hazel Szeto of Weill Cornell Medicine to test a peptide called SS-31 in horses with mild to severe ankle sprains. The peptide stabilizes mitochondria in the damaged tissue, acting like a molecular brace for the sprain, and preventing further damage, which can lead to the irreversible process of arthritis. Fortier’s work will yield evidence-based therapies for treating sprains, with the ultimate goal of averting arthritis in horses, dogs and humans.

A SERENDIPITIOUS DISCOVERY
While sprains are painful and inconvenient, a more serious health problem in humans and horses is the sequela of post-traumatic osteoarthritis. Trauma from a fall, vehicle accident, or military injury can trigger this type of arthritis, which develops months, years or even decades after the initial damage.
Injury to a joint also damages the mitochondria in cartilage tissue. These organelles, which normally are packed full of waves of internal membranes, become disorganized and leaky. Without a source of energy from the mitochondria, cells
die and the cartilage degrades. Developing drugs that target the cells in the cartilage, however has been a challenge for researchers. Szeto and colleagues serendipitously discovered SS-31, a small, water-soluble peptide with a unique charge density that allows it to penetrate the tissue and cross the cell membrane. It enters the mitochondria where it binds to cardiolipin, a phospholipid that makes up part of the inner membrane, thus stabilizing the membrane and restoring power to the cell.

ONE PEPTIDE, MANY POSSIBILITIES
Several phase II clinical trials of SS-31 are underway in humans for diseases where mitochondrial dysfunction plays a role, with phase III trials in the planning stages. Szeto and colleagues are investigating the peptide’s eﬀectiveness at treating acute myocardial infarction, heart failure, renal disease, and age-related macular degeneration. SS-31 appears to have no oﬀ-target eﬀects and can be taken in liquid form, so potentially it could be sold as an over-the-counter medication.
Now, Fortier and Dr. Michelle Delco, an assistant research professor and equine surgeon in her lab, are testing a single dose of the peptide in six horses that have experienced trauma to the cartilage of the hock joint, as a model for human ankle sprains. It’s a proof-of-concept experiment to see if they can stabilize the tissue and prevent arthritis. “We’re trying to study the early disease process, long before clinical signs associated with arthritis such as bone spurs and lameness appear,” says Fortier. It’s the very early stages of trauma that we and others are targeting for therapy and prevention.”
The resulting treatments can be applied to human ankles, horses with stiﬂe injuries, and dogs with cruciate ligament trauma. “That’s the cool thing about our work,” says Fortier. “We identify a problem in the clinic and we can take it to the laboratory and design studies to simultaneously help humans and animals.”

NOTEWORTHY WORK
Next, Fortier and her colleagues plan to develop better diagnostic procedures, using MRI and CT techniques, to detect the earliest signs of degeneration. Existing clinical methods are not sensitive enough to pick up changes in cellular metabolism in the cartilage to study post-traumatic arthritis.
These projects, and Fortier’s other innovative research, recently earned her the title of the James Law Professor of Equine Surgery. “To me, it’s a huge honor because you’re selected internally by your peers,” says Fortier. “To be recognized for the work my group has done is really humbling.”