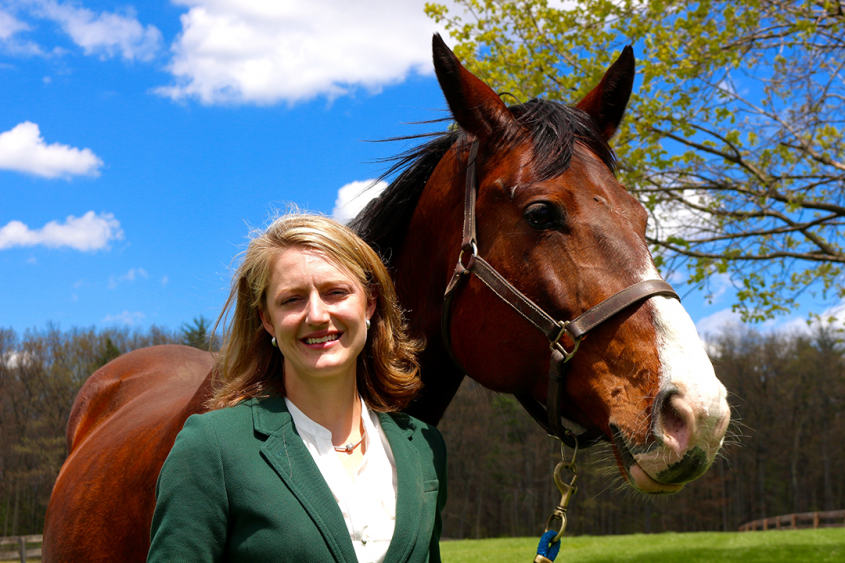 Metabolomics provides a snapshot of the physiological condition in biological samples. Heidi Reesink performed metabolomics analyses on equine synovial fluid, the liquid that fills the joint cavity and reduces friction during movement in joints, using this new core facility. Photo by Elvina Yau.

A Cornell-based biotechnology startup is developing a new product for toxicity screening. Heidi Reesink Ph.D. '00, DVM '16 from the College of Veterinary Medicine is discovering new molecules associated with osteoarthritis in horses, while another researcher is understanding how ripening tomatoes acquire their color and flavor.

These are a few projects that are benefitting from the launch of the Cornell Institute of Biotechnology’s new Metabolomics core facility, which opened in January.

Metabolomics explores the small molecules, or metabolites, that are produced by either an organism or an exogenous source and that are found in a cell, a tissue or a biofluid (such as semen, amniotic fluid, saliva, breath, sweat, urine and blood). Metabolomics provides a snapshot of the physiological condition in biological samples.

With an investment by the Office for the Vice Provost for Research, complemented by funding from the College of Agriculture and Life Sciences and the College of Arts and Sciences, the Metabolomics core facility purchased two complementary instruments to screen and quantify metabolites. These include a gas-chromatograph (GC) and a liquid-chromatograph, each coupled to a mass spectrometer (MS).

A third piece of equipment was loaned by a leading biotechnology company, Sciex, and will serve the facility for one year.

“Having the facility on campus is tremendously beneficial for my research,” said Carmen Catalá, senior research associate at the Cornell-affiliated Boyce Thompson Institute for Plant Research.

Metabolomics has applications in all areas of the life sciences, from discovery of biomarkers for noninvasive diagnosis of cancer to drug development, veterinary medicine and crop adaptation to heat and drought. Since its launch, the facility has allowed new research possibilities for Cornell scientists and entrepreneurs.

“Some metabolites like organic chemicals may not be stable and are damaged in transport. Having a facility on campus is really great,” said Alexander Hoepker, biochemist at Zymtronix, a Cornell-based biotechnology startup.

Zymtronix is using metabolomics to develop a new technology that relies on enzymes for toxicity screening. Toxicity screening evaluates the toxicity of chemicals in consumer drugs and products, such as acetaminophen in Tylenol or parabens in beauty products. The metabolites produced by enzymatic activity can be profiled by metabolomics analyses and used as an indicator of toxicity and side effects happening in a cell exposed to a particular drug.

“In metabolomics, analyses can be very complex,” Hoepker said. “The facility’s services include [data] analysis and this is huge. This is typically not the case. It’s incredibly valuable.”

Heidi Reesink, assistant professor of large animal surgery in the College of Veterinary Medicine, studies osteoarthritis in horses. She performed metabolomics analyses on synovial fluid, the liquid that fills the joint cavity and reduces friction during movement in joints. Early results identified potential environmental toxins in joint fluid from animals with synovial inflammation and osteoarthritis.

She also identified pro- and anti-inflammatory compounds that were not previously associated with arthritis. “Our analyses have led to new hypotheses about the role of metabolism in arthritis,” Reesink said.

The Metabolomics core facility is invaluable, she said. “The interpersonal interaction and face-to-face feedback is a huge strength of the facility,” Reesink said.

Some of the metabolites that contribute to attractiveness for consumers also have beneficial effects to human health. For example, color pigments like carotenoids and flavonoids have antioxidant properties; other metabolites are good sources of dietary fibers and vitamins. By mapping the biochemical pathways involved in fruit formation, and connecting tomato genes with metabolic functions, Catalá’s goal is to identify the key factors that contribute to fruit quality.

“With the facility, I can now perform targeted metabolite analysis by GC-MS,” Catalá said. “The equipment at the facility has really opened new possibilities.”

The metabolomics facility adds to the suite of core facilities that comprise the biotechnology resource center, which includes services for genomics, bioinformatics, proteomics, and imaging.