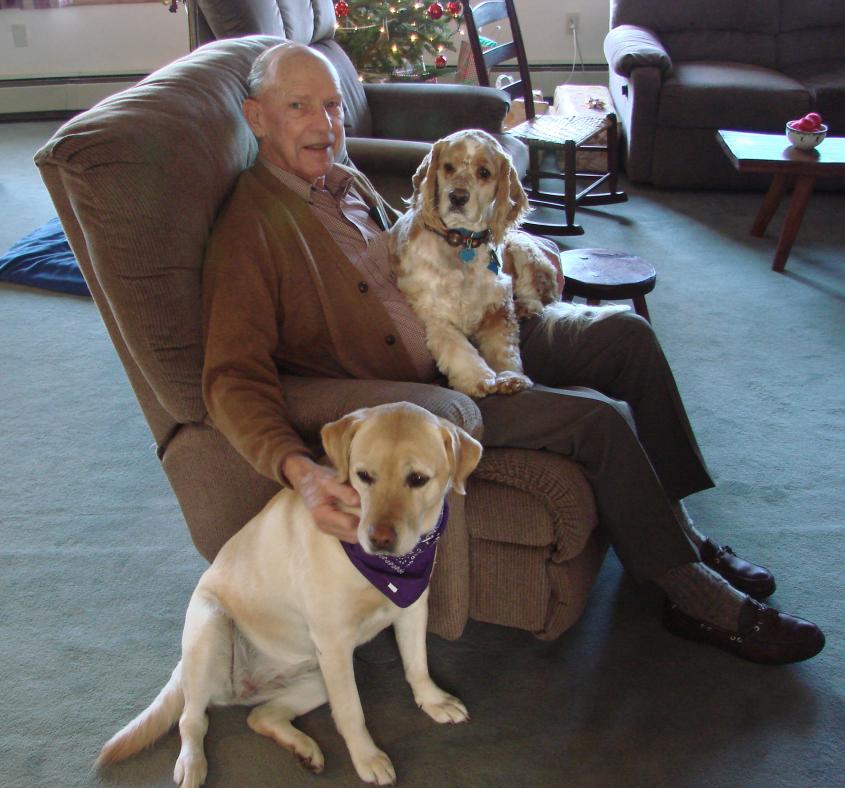 N. Bruce Haynes, D.V.M. '52, pictured here with Harley and Marley, was a strong ambassador for the College of Veterinary Medicine. Photo provided.

This year’s Salmon Award recognizes the distinguished service of N. Bruce Haynes, D.V.M. ’52, who passed away on Oct. 7, 2017. Throughout his career, Haynes was a strong ambassador for the college. “He was a role model to students and family alike,” says Haynes’ daughter Beth Haynes Hadley, “teaching the value of working hard and always doing your best, no matter the task.” He lived these values during his work with dairy cattle and herd health management throughout his career.

The Alumni Association established the Daniel Elmer Salmon Award for Distinguished Alumni Service in 1986 to honor graduates of the Cornell University College of Veterinary Medicine who have distinguished themselves in service to the profession, their communities or to the college. The award is named in honor of Daniel Elmer Salmon, Cornell's first D.V.M. graduate who made pioneering efforts in controlling contagious animal diseases in the early twentieth century.

Haynes served in the Navy and graduated from Baldwin Wallace College with a bachelor’s degree. After his graduation from Cornell in 1952, Haynes worked as an associate veterinarian in Augusta, Maine, then returned to New York to open his own practice in Millerton. While his primary focus was on cattle, Haynes treated both large and small animals. He was an early proponent of preventative medicine and herd health.

In 1964, Cornell invited Haynes to become the university’s first full-time extension veterinarian. His responsibilities included extension, continuing education and teaching. He also served on the president’s committee on the land-grant mission of the university.

Haynes’ role as extension veterinarian made him uniquely suited to fulfill the university’s land-grant mission to advance the lives and livelihoods of the state’s citizens. Haynes acted as Cornell’s boots on the ground, assisting residents across the state with their veterinary needs. He was a frequent speaker at livestock owner meetings around the state and co-authored 22 articles on large animal herd health for outlets like the Journal of the American Veterinary Medical Association, Successful Farming Magazine, Hoard’s Dairyman and Modern Veterinary Practice. His book Keeping Livestock Healthy, published by Garden Way Publishing in 1978, is still a popular handbook for those seeking better health for their livestock. The book is currently in its fourth edition and has been printed in several languages.

“Dad was a gifted writer,” says Hadley, “and he wanted to see the extension of the profession grow and for people to have access to information more easily.”

In 1967, Cornell appointed Haynes associate professor of veterinary science and director of veterinary extension. The New York State Veterinary Medical Society named Haynes Veterinarian of the Year in 1975, and a year later he earned a $5,000 grant to develop an auto-tutorial lending library for veterinarians. While at Cornell, he held many positions, including time spent as the director of continuing education, assistant editor of Veterinary News and the business manager of the Cornell Veterinarian, where he also served on the board of directors.

“As extension veterinarian Dr. Haynes was an outstanding, unique ambassador for the college,” says Robert Kahrs, D.V.M. ’54, Ph.D. ’54, M.S. ’63. “He traveled the state giving speeches to veterinarians and livestock, pet, poultry and bird owners. Without appearing as a fundraiser he inspired donations and political support for the college.”

Haynes served on and led multiple committees at Cornell, where colleagues could rely on his expertise, insights and practical know-how into the field.

“He effectively addressed all expectations with knowledge, skill, experience and wisdom,” says Kahrs.

Haynes was also a skilled carpenter and woodworker; not only did he build countless items of furniture for his family, but he also built the veterinary clinic and home in Millerton, and two camps in Maine as well.

“He built the clinic and the house,” says Hadley, who recalls the hand-operated centrifuge in the clinic. “It used to be my job to crank it.” she says. “Veterinary medicine has come a long way since then!”

In addition to the many ways Haynes served the college during his tenure, he also served on committees and panels for the profession at large, such as the National Mastitis Council and with the U.S. Animal Health Association, and he acted as president of the American Association of Veterinary Nutritionists and director of the American Association of Extension Veterinarians. While practicing in Millerton, Haynes served in the volunteer fire department, was a village trustee, and a member of its board of education.

“In Ithaca,” says Kahrs, “he was a member of the Official Board of St. Paul's Methodist Church and was very active in the Rotary International, involving the Student Exchange and Rural-Urban Relations Committee. He also served on the SUNY Continuing Education Sub-Committee of the Health Sciences Advisory Council.”

In July 1979 Haynes resigned his position at Cornell and relocated to East Monmouth, Maine, where he turned his talents to restoring an old New England farmhouse and barn and was successful in the endeavor to raise bedding plants and vegetables on the 35-acre farm they named Folly Farm. Hadley adds, “They named it Folly Farm because he said all his colleagues thought his choice was a little crazy.”

He remained active in Rotary International serving as President.  A later move to Skowhegan, Maine and a more traditional retirement enabled him to complete the last revision of his book. He greatly enjoyed more frequent fishing trips on Moosehead Lake.

Haynes remained active in his interest in the college throughout his retirement. He provided financial support and mentored many young students as they cycled through the D.V.M. program. Even in retirement, Haynes’ dedication to the college and the field of veterinary medicine at large stood out.  His work ethic and can-do attitude reached beyond the lives he touched while at Cornell. 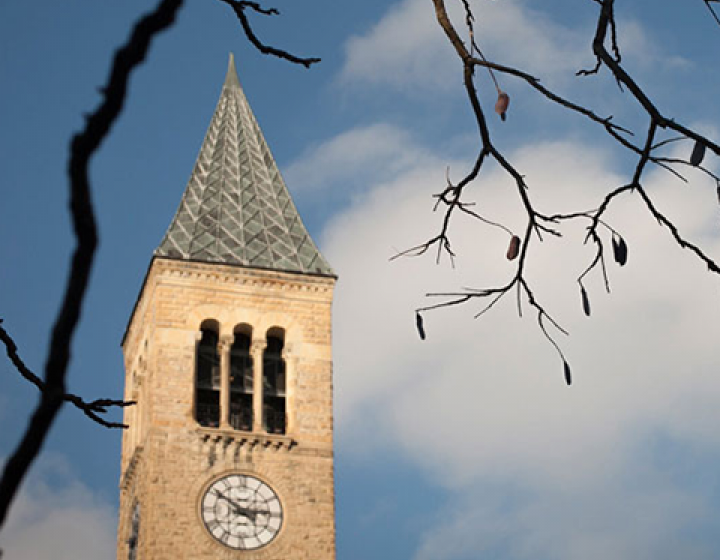