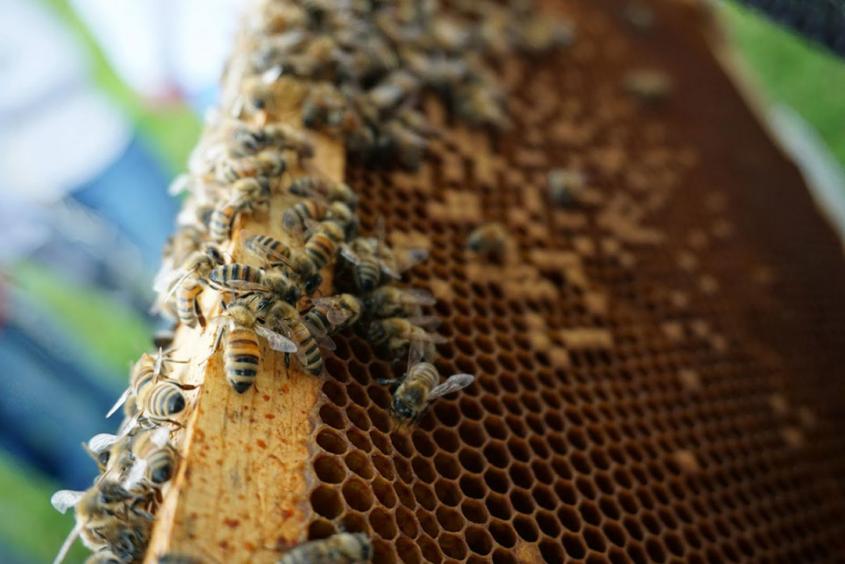 To assess the health of a hive, a bee veterinarian must look at the comb and the brood, and analyze the behavior of both individual and groups of bees. Photo provided.

Veterinarians are trained to handle patients with four legs, two legs and sometimes no legs – but six legs might pose some new challenges.

“The veterinary field has a lot to offer bee colonies and beekeepers,” said Radcliffe. “And there is a real need here in New York state as well.”

Honeybees are crucial for New York’s agricultural economy. Crops such as apples, grapes and strawberries rely completely on pollination – leaving an estimated $383.5 million per year in the “hands” of the hive. Increasingly, these tiny engines of economic productivity have faced growing threats, ranging from hive management practices to climate change.

New York has only two state bee inspectors, placing the onus on individual beekeepers to monitor and maintain colony health. Veterinarians are also now required to prescribe antibiotic treatments to honeybee colonies due to a 2016 U.S. Food and Drug Administration directive categorizing honeybees as food-producing livestock.

Radcliffe’s course takes a more holistic view of the hive. “The goal of our course is to show veterinarians that they should not approach this as just providing a pharmacy for beekeepers,” he said. “Our approach is to emphasize that veterinarians have a lot of skills to offer, and that includes understanding infectious disease, pathology, the parasites and their life cycles, as well as bee anatomy and physiology.” The course will be offered each year to roughly a dozen second-year veterinary students. Ninety students requested to take it this summer.

Said William Fugina, a fourth-year veterinary student and teaching assistant for the course: “It is a completely novel area of veterinary medicine that is not only unexplored, but also has extremely important agricultural and conservation implications. My passion in wildlife conservation and public health certainly resonates with the veterinary role for the honeybee.”

Radcliffe has always had a keen interest in honeybees. This passion eventually connected him with honeybee expert Thomas D. Seeley, the Horace White Professor of Biology, and other bee researchers across the campus. Radcliffe and Seeley devised a novel method of locating wild honeybee trees in deep forest, a method that they published in the August issue of American Bee Journal, and which Radcliffe wrote about in the June issue New York State Conservationist.

Beyond the fact that bees are invertebrates and possess many different physiological systems compared with vertebrates, honeybee care is “more herd health, and has a lot of parallels to population medicine and public health. Our patient is not the single bee, but the whole colony – biologically the complex communication and cooperation among bees known as the ‘superorganism.’”

Radcliffe teaches students what normal “brood” looks like – the eggs and developing pupae – so they will recognize signs of the America foulbrood, a bacteria that will kill larvae and easily spread from hive to hive. Students are also schooled in the honeybee’s greatest foe, the varroa mite. These invasive parasites from China arrived in New York in 1995. They feed off adult bees and their brood, causing the entire colony to weaken and, if left untreated, collapse.

Radcliffe’s veterinary students also learn about threats human activity pose to honeybees. The use of harmful insecticides on crops, the rapid shift in food sources due to climate change, and dwindling habitat due to land development add more pressure on honeybees and other pollinators. Today, 75 to 80 percent of all domestic honeybee colonies are transported to California to pollinate almond groves, threatening bees’ normal functioning and stressing whole colonies.

“There are many stressors that affect honeybees today. It’s a really complex mix of problems,” Radcliffe says. Thanks to his new course, Cornell veterinarians will soon be helping to solve them.