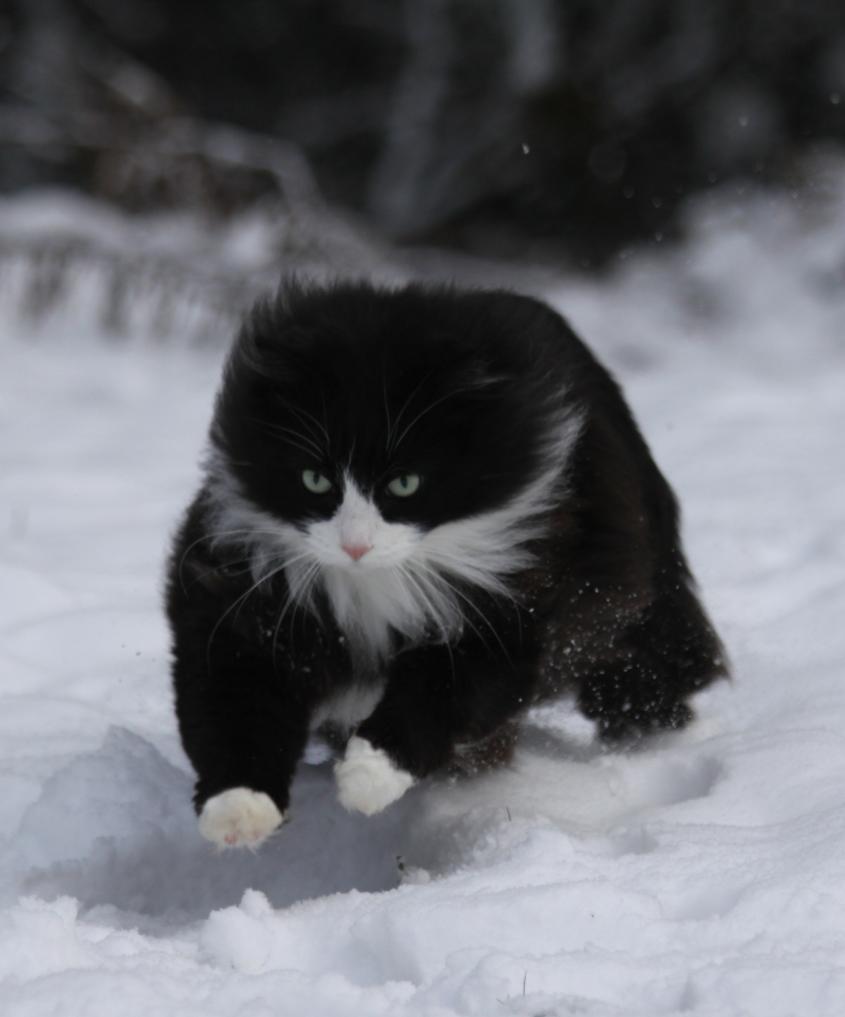 Gerty the cat bounds through the snow. Photos provided.

During Gertrude "Gerty" Muroff's annual exam, her veterinarian discovered an arrhythmia - a slow heart beat - that required immediate attention. David Muroff took Gerty, a 12-year-old cat, to Upstate Veterinary Services in Albany, where she was diagnosed by colleagues with heart block (atrioventricular nodal, or AV, block). This arrhythmia caused her heart to beat too slowly and they recommended pacemaker implantation. Prior to her appointment for surgical pretesting, Gerty’s condition worsened.

“One day, she couldn’t stand up without collapsing, wasn’t hungry and was trying to catch her breath,” says Muroff. “We called her doctor who recommended we take her to Cornell Emergency Service right away.”

Gerty was admitted to Cornell Emergency Service with respiratory distress and bradycardia (slow heart rate). Her heart rate was slowing and, by the next day, it was 110 beats per minute (bpm). At that point, she was transferred to Cornell’s Cardiology Service.

“A slow heart rate is very unusual for a cat and Gerty’s was much too slow, which is why a pacemaker was considered,” says Dr. Christophe Bourguignon, a cardiology resident. “However, her heart rate fell into what we consider a ‘gray zone.’ At between 100 and 110 bpm, a pacemaker isn’t an absolute certainty, so we wanted to explore other solutions.”

He explains pacemakers are implanted regularly in dogs; a lead is placed through a vein to the heart and connected to a pacemaker under the tissue of the neck or shoulder. However, because cats are much smaller, Bourguignon says, “It’s a much more complicated surgery that puts the animal at greater risk, even for death.”

That’s one of the many things I love about the staff at Cornell; they don’t walk away from you until they’re sure you know what’s going on and what to do.

“There are many causes of AV block, including scarring in the heart or inflammation that triggers swelling,” says Bourguignon. “In Gerty’s case we believe it was myocarditis, inflammation potentially caused by an infection. We prescribed the antibiotic Clindamycin in the hopes that when the infection or inflammation cleared the heart rate would return to normal.” Therefore, while Gerty’s condition was emergent, he and other members of the cardiology staff took the time to be thoughtful and not rush to surgery. They confirmed the diagnosis of third-degree AV block.

Muroff was taught how to check her heart rate and monitored it every three days, reporting back to Cornell. “The first time I heard an arrhythmia, I described what I was hearing to them and they confirmed what it was. They helped educate me on the technique and the terms,” he says, adding, “That’s one of the many things I love about the staff at Cornell; they don’t walk away from you until they’re sure you know what’s going on and what to do.”

Between the time Gerty left Cornell in February and her return visit in July, Muroff noticed irregularities in her heart rate about 10 to 15 times. Since July, Muroff says Gerty has only had two episodes, and none in recent weeks. More importantly, she has returned to her old self and is back to enjoying what he calls her “hikes in the woods.” Gerty loves to romp and pounce about 100 yards into the woods behind the house. Since her heart rate has become more stable, she’s eager to get out every day. She also enjoys sitting with Muroff on the porch every night and surprised him when she dove off the stairs and chased a mouse across the driveway one evening.

“The Saturday we went to Cornell Emergency Services, we thought she was on death’s door. Now, it’s nearly a year later and I’ve gotten all that time with her. I consider it a gift,” he says. “I call Dr. Bourguignon and all of the staff there her saviors. They’re all just wonderful.”

The doctors couldn’t be happier with her outcome either. “Between the risk of general anesthesia and the cost of the surgery, we believed it was best for Gerty and her owners if we took a more measured approach instead of just putting in the pacemaker,” says Bourguignon. “Gerty’s case was a good teaching moment for residents to see how sometimes it’s better to wait and see, for the benefit of both the owner and animal. Of course, we also know how important follow-up is to ensure that health continues. The best care is attention that does not stop. We want Gerty’s heart to keep beating for many years to come.”