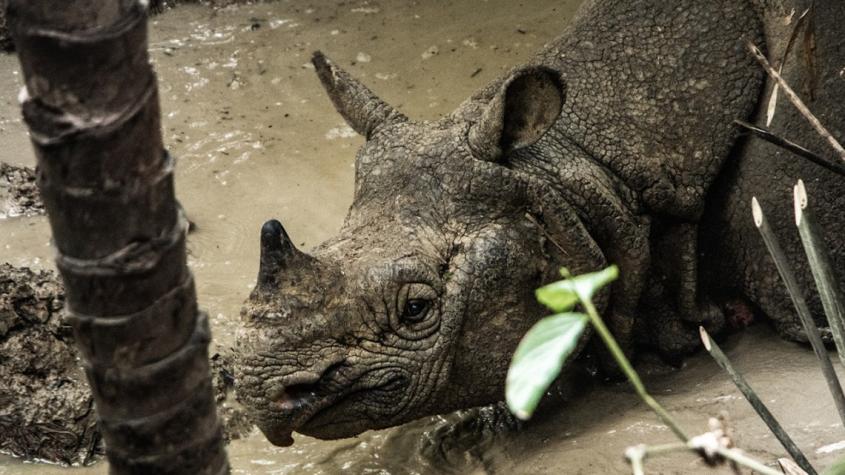 Rhinoceroses are instantly recognizable by their rumpled gray skin, immense snouts and iconic horns, but not so much their voices.

That could change thanks to the efforts of Montana Stone ’19, who is working to document the vocalizations of Javan rhinos through a collaboration with the Lab of Ornithology’s Bioacoustics Research Program and Indonesia’s Ujung Kulon National Park.

Stone’s project began in summer 2017, when she visited West Java as part of the Conservation with Communities for One Health course. Funded through Engaged Cornell, the One Health course sends multidisciplinary teams of undergraduate and Doctor of Veterinary Medicine students to Indonesia, Uganda and the Republic of the Congo to collaborate with groups like the Jane Goodall Institute in Africa and the Alliance of Integrated Forest Conservation in Indonesia.

Working with course leader Robin Radcliffe, senior lecturer in wildlife and conservation medicine, Stone began analyzing the sounds of rhinos captured on archival video recordings from Ujung Kulon and the World Wildlife Fund (WWF) over the last decade. While the park uses camera traps to monitor the size of the critically endangered rhino population, no one had focused on the vocalizations before.

Stone, who studies evolution, said these vocalizations are unique.

“For instance, the vocalizations of the Sumatran rhino are thought to be more closely related to the extinct wooly rhino,” she said. “They vocalize almost constantly, and it’s comparable to the sounds of humpback whales. But Indian and African rhinos vocalize mostly through grunts.

“By doing that first analysis,” Stone said, “we were able to determine that Javan rhinos vocalize more similarly to the Indian rhinos. So we can learn a little bit about the evolutionary history of this mode of communication, which is pretty cool.”

This summer, Stone returned to Indonesia for two months as a teaching assistant for the One Health course. With financial support from the Atkinson Center for a Sustainable Future, she was able to bring along 25 Swift boxes – small, lightweight, acoustic recorders created by the Bioacoustics Research Program to capture the sounds of wildlife (often elephants) in their natural habitat. Montana trained Ujung Kulon’s rhino health and protection units, and WWF employees on how to set up and deploy the Swift boxes throughout the park.

The technology is paired with camera traps to render a complete audio-visual record of the rhinos, which are notoriously difficult to see in the dense forest. Park rangers can sometimes go years without spotting one.

The project comes at a crucial moment for the Javan rhinos. There are currently only 68 remaining – without any in captivity – and Ujung Kulon sits atop a fault line near an active volcano. The Indonesian government has approved an ambitious plan to relocate some of the rhinos to safer terrain. Stone and Radcliffe are hopeful their research may aid in the animals’ transport.

“If you play the calming tones of the mother – in the case of the Javan rhino, it would be the nonaggressive grunt, which is repetitive and occurs at a regular interval – it might lower the stress level of the animal during transportation,” Stone said.

The recordings will also allow conservationists to better monitor the Javan rhino population and gain insights into their group dynamics and structure, and could help in identifying good candidates for translocation.

While Stone didn’t see any Javan rhinos in the wild during her trip, she did have another noteworthy encounter: She met Indonesian President Joko Widodo, at a coffee shop. “This was huge for one of our students, to meet the president of Indonesia, no matter what the circumstances,” Radcliffe said.

Stone is currently facing the most nail-biting part of the project: waiting for two external hard drives containing 16 terabytes of acoustical data to be shipped back to Ithaca so she can begin analyzing the audio with the Lab of Ornithology’s Raven software, which turns audio signals into spectrograms that can be examined more quickly and efficiently.

Even with the software accelerating the process, the task is daunting. Stone must review information from 23 cameras, each recording 23 hours and 55 minutes every day for two months. Stone expects to spend four to six weeks sifting through the findings.

“Sounds like her Christmas is gone,” Radcliffe said with a laugh.

Meanwhile, the Swift boxes have been donated to the WWF to aid in their rhino conservation efforts, with an extra pair of the recorders given to a team who recently trapped a Sumatran rhino that had been eluding conservationists in Borneo for months.

“This is one of the rarest rhinos in the world,” Radcliffe said. “There’s only a handful on Borneo. Even though Montana is focused on the Javan rhino, it might have implications for the Sumatran rhino as well.”

Of course, all this attention to the vocalizations of rhinos shouldn’t detract from the species’ exterior qualities. During their trip, Radcliffe and the students visited a Sumatran rhino sanctuary in Way Kambas.

“We were able to see one of the male rhinos,” Stone said. “It’s amazing. Every time you look at one, you see something different. They’re just beautiful, beautiful animals.”