Discovery reveals mechanism that turns herpes virus on and off 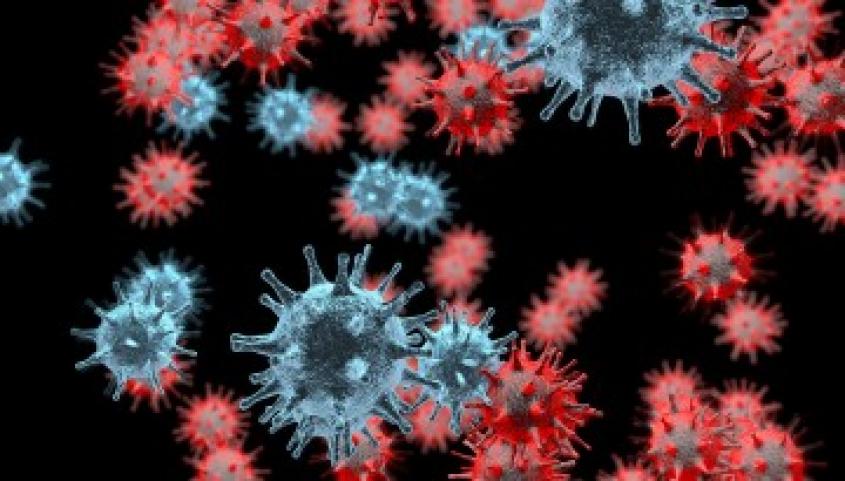 The discovery opens up new directions for exploring how the virus reactivates after lying dormant. Herpes’ ability to lay low has thwarted efforts to create effective vaccines or antiviral drugs that fully prevent or cure the infection. Image of herpes virus provided.

The herpes virus causes cold sores and genital sores, as well as life-threatening infections in newborns, encephalitis and corneal blindness.

Treatment of the virus is difficult, because it hides in nerve cells and emerges months or years later to reactivate the infection. New research from Dr. Luis Schang and his group at the Baker Institute for Animal Health has identified a mechanism that plays a role in controlling how the virus alternates between dormant and active stages of infection.

In Schang’s group, Mi Yao Hu and Esteban Flores Cortes discovered that the virus switches between the “latent” stage and the “lytic” stage, in which it is actively replicating, depending on how tightly its DNA is packaged into bundles called chromatin.

Their findings are in a paper, “Chromatin Dynamics and the Transcriptional Competence of HSV-1 Genomes During Lytic Infections,” which published Nov. 14 in PLOS Pathogens. Schang’s group collaborated with scientists from the University of Alberta, Canada and University College London (UCL).

“Any problem that herpes causes is because of reactivation from latency,” Schang said. “That’s the reason why antivirals cannot cure the infection and why so far it’s been impossible to develop a vaccine. Latency and reactivation are a major focus for herpes virus research.”

When the herpes virus enters a cell, the cell tries to protect itself by wrapping the viral DNA tightly around spool-like proteins called histones and condensing it into chromatin, which causes the virus to go dormant. But if the cells are unsuccessful, the chromatin is only loosely bundled, leaving the viral DNA accessible. The virus particles can then turn on their genes and replicate using the cell’s machinery to start a lytic infection, causing disease.

Most researchers have focused on when and how individual genes on the herpes virus genome are turned on and off during infection to figure out how the virus switches between latent and lytic stages. In the new study, however, the group showed that the dynamics of the chromatin regulate whether the entire herpes virus genome is turned on, which must occur before any individual genes can be expressed. This new mechanism represents a previously overlooked way to regulate gene expression at the level of the entire viral chromosome.

With this new knowledge, researchers can further explore the interplay between the virus and host cells that determines whether viral DNA is expressed. Antiviral drugs to treat herpes have existed since the 1960s, but thus far a cure or an effective vaccine has been out of reach.

“Latency and gene regulation is a big problem because we do not know nearly enough about it,” said Schang. “It’s big black box in herpes biology.”

The discovery opens up new directions for exploring how the virus reactivates after lying dormant. Herpes’ ability to lay low has thwarted efforts to create effective vaccines or antiviral drugs that fully prevent or cure the infection.

Support for this work came from the Canadian Institutes of Health Research and the University College London Hospital/UCL Biomedical Research Centre.