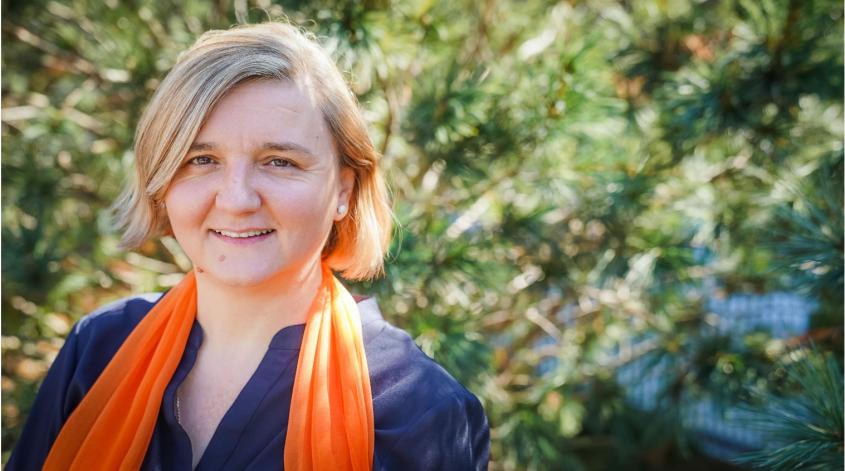 Renata Ivanek, Ph.D. '08, and her team report that broad efforts to eradicate Listeria from our food system may have an unexpectedly small impact on the number of cases, or may even make the risk of listeriosis worse, depending on the types of strains that are circulating.

Deli meats, soft cheeses, cantaloupes — each year, these and other foods contaminated with the bacterium Listeria monocytogenes cause about 1,600 cases of listeriosis in the United States and about 260 deaths. To prevent these rare but deadly infections, public health officials track outbreaks back to their source and companies perform extensive testing in food processing facilities to root out contamination. But despite the extent of these control efforts, annual listeriosis cases in the United States have not declined as much as expected.

Renata Ivanek, Ph.D. ’08, associate professor of population medicine and diagnostic sciences, is trying to figure out why we still have so many cases of listeriosis and find new ways to prevent them. Researchers in her lab are looking at factors across our food system, from harvesting methods to contamination at food processing plants to consumer behavior around processed foods. In a new paper in the journal Interface Focus, her team reports that broad efforts to eradicate Listeria from our food system may have an unexpectedly small impact on the number of cases, or may even make the risk of listeriosis worse, depending on the types of strains that are circulating.

“The mortality rate for listeria is so high compared to other foodborne pathogens,” Ivanek says. “That's one reason why we really would like to reduce cases to at least half of the current number.”

According to a U.S. Food and Drug Administration report, the average person consumes food contaminated with Listeria 22 times each year, usually in ready-to-eat foods. “It's a ubiquitous pathogen,” Ivanek says. “It becomes a problem when it enters foods that are not meant to be cooked before eating, because Listeria can grow, slowly but steadily, under refrigeration temperatures.” Young, healthy people rarely develop an infection, which causes diarrhea, fever and flu-like symptoms. But listeriosis is especially dangerous for elderly individuals, people with weakened immune systems and pregnant women, and can also cause miscarriages or premature birth.

Not all Listeria strains are equally dangerous, however. About half the Listeria found in food are attenuated strains, meaning that they have a mutation that prevents them from penetrating the walls of the intestines so they can do less damage. Attenuated strains cause about five percent of Listeria cases, while fully virulent strains without this mutation are responsible for the remaining majority of outbreaks.

Ivanek and her collaborators had an out-of-the-box hypothesis that our frequent exposure to attenuated strains might be acting like a natural vaccine. These strains potentially could prime the immune system to attack more virulent strains and prevent serious infections.

To test this idea in mice, she teamed up with Dr. Kendra Nightingale, associate professor of animal and food sciences at Texas Tech University. Her group discovered that mice exposed to a sizeable dose of an attenuated strain of Listeria were protected from later exposure to a virulent strain. A medium-sized dose of the attenuated strain, similar to the amount most commonly found in contaminated food, offered partial protection.

To see how this vaccination effect might be impacting listeriosis infections in the U.S. population, Ivanek’s group plugged the mouse data into a mathematical model that considers multiple factors to estimate annual Listeria cases. Assuming that humans have a similar immune response as the mice, and the number of virulent strains stays the same, the model predicted that removing the attenuated strains — which are more common and thus easier to find compared to the virulent strains — would have an adverse effect on public health. For example, removing more than half of the attenuated strains, without comparable success in controlling virulent strains, would cause a six percent increase in cases because people would lose the immunity triggered by the milder strains.

This could be one explanation why numbers of Listeria cases aren’t dropping despite eradication efforts — the virulent strains are still circulating and people have less protection against them.

It follows that intentionally consuming attenuated Listeria strains may prevent future outbreaks, but these strains still pose a small risk of disease. “We cannot advocate using food as a natural vaccinator,” Ivanek says. “Even if it causes one case, it is one too many.” Instead, she hopes this work will spark interest in the development of a Listeria vaccine, which could be a lifesaver for at-risk individuals, and also prevent listeriosis-associated miscarriages. Ivanek stresses that, should a vaccine be developed, current industry efforts to eliminate Listeria from the food supply should continue. But they may evolve to include identifying Listeria strains, to specifically target the virulent ones.

Ivanek is continuing her hunt to find ways to curb the spread of Listeria, and with collaborators at Cornell plans to investigate how consumer behavior and messaging about food safety impact the likelihood of listeriosis outbreaks. People tend to be more wary of food poisoning during an outbreak, but become less vigilant about washing, storing and preparing food properly once the outbreak is over. A better understanding of this behavior would improve the accuracy of her model.

Her team has also been looking into the risk of Listeria posed by frozen foods, like fruits and vegetables used in smoothies or salads. Most of these foods are meant to be cooked, so they have rarely caused outbreaks. “Recent recalls and outbreaks associated with frozen vegetables have urged us to take a new look into how we consume frozen foods and the associated risks,” Ivanek says, “so that we can find strategies to reduce the risk and keep this important source of nutrients safe for the public.”