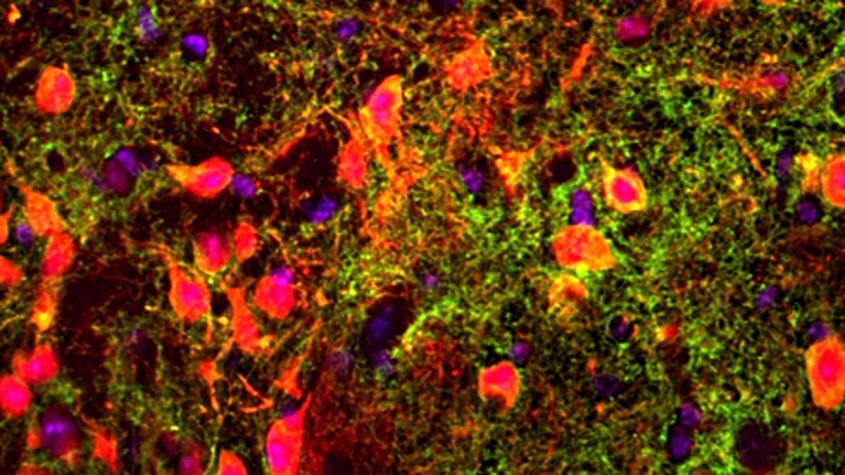 The image shows neurons in the thalamus with GPR12 protein receptors (red), with the receptors themselves (green) lying in terminals at the end of axons that stretch away from each cell’s body. Purple marks other neurons. (Photo: Kuangfu Hsiao/Provided)

A new study in mice identifies a gene that is critical for short-term memory but functions in a part of the brain not traditionally associated with memory.

The study, “A Thalamic Orphan Receptor Drives Variability in Short Term Memory,” was published on Sept. 29 in the journal Cell.

Classical studies of short-term memory have concentrated on the prefrontal cortex area of the brain. Recent studies, however, have suggested other brain regions may also play a role.

To discover new genes and brain circuits that are important for short-term memory, the researchers turned to studying genetically diverse mice, rather than inbred mice commonly used in research.

“We needed a population that is diverse enough to be able to answer the question of what genetic differences might account for variation in short-term memory,” said Dr. Praveen Sethupathy ’03, associate professor of biomedical sciences in the College of Veterinary Medicine, director of the Cornell Center for Vertebrate Genomics, and a senior author of the study.

Dr. Priya Rajasethupathy ’04, the Jonathan M. Nelson Family Assistant Professor and head of the Laboratory of Neural Dynamics and Cognition at Rockefeller University, is the other senior author of the paper. Sethupathy and Rajasethupathy are siblings; they conceived of this study over family dinners. Dr. Kuangfu Hsiao, a research associate at Rockefeller University, is the lead author of the study.

The researchers began with about 200 genetically diverse mice to identify regions of the DNA that contribute to the observed variation in short-term memory among the mice. They screened the mice on a short-term memory task and used genetic mapping techniques to identify a region of the genome, harboring 26 genes, that is associated with working memory. With further genome-scale analyses, they whittled the list of genes down to four of special interest. By disabling each of these four genes one at a time, they found that one in particular, Gpr12, coded for a protein that is required for and promotes working memory.

“I expected the prefrontal cortex would be the region most globally changed by the activity of Gpr12,” Rajasethupathy said. “Strikingly, it was actually the thalamus, by far.”

They also found that when they took low-performing mice and increased the amount of the Gpr12 protein in the thalamus, their accuracy in the memory task increased from 50% to 80%, similar to the level of high-performers.

To understand the neural circuits involved, the researchers compared low performers against low performers with artificially increased Gpr12 protein in the thalamus. These mice were also engineered with fluorescent calcium sensors that light up when a neuron is active. They recorded neurons firing in multiple brain regions while the mice performed the memory task. During many phases of the task, when short-term memory was required, the researchers observed synchronous activity between the prefrontal cortex and thalamus.

“When the thalamus activity went down, prefrontal went down; when the thalamus went up, prefrontal went up,” Rajasethupathy said. “We found that these two brain regions are very highly correlated with each other in high-performers but not in low-performers. This finding implies a directionality [where one area influences the other], but we don’t yet know the direction.”

Often, when scientists identify that a specific gene is linked to a certain behavior, it takes time and more research to understand how that gene is driving the behavior, Rajasethupathy said.

“We were inspired in this study to link genetics to neural circuits to behavior,” Sethupathy added. “Future work will investigate what mechanisms regulate the Gpr12 gene and what signaling pathways downstream of the Gpr12 protein mediate its effects.”

Interestingly, the Gpr12 gene is highly conserved among mammals, including humans. The work therefore offers the possibility of a novel therapeutic angle for reversing deficits in short-term memory. More immediately, it adds a new dimension to classical models by emphasizing the importance of a two-way neural dialogue between the prefrontal cortex and the thalamus in support of short-term memory.

This story originally appeared in the Cornell Chronicle