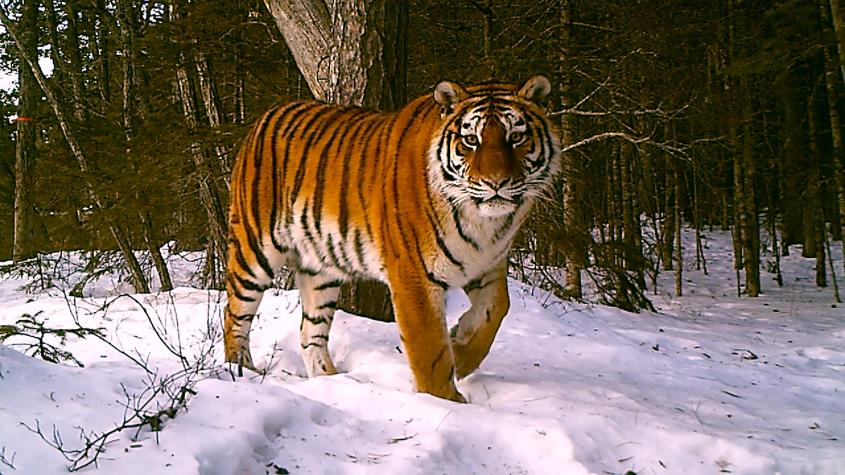 If you think getting your cat to the vet is tricky, new research has revealed that vaccination of endangered Amur (Siberian) tigers is the only practical strategy to protect these big cats from a dangerous disease in their natural habitat in the Russian Far East.

Canine distemper virus (CDV) causes a serious disease in domestic dogs, and also infects other carnivores, including threatened species like the Amur tiger, which numbers fewer than 550 individuals in the Russian Far East and neighbouring China. It is often assumed that domestic dogs are the primary source of CDV, but in a study published in the Proceedings of the National Academy of Sciences, the Cornell Wildlife Health Center’s Dr. Martin Gilbert and colleagues found that other local wildlife was the primary source of CDV transmission to tigers instead.

“Understanding how tigers are catching distemper is absolutely crucial to helping us design effective measures to minimize the conservation impact of the virus” said Gilbert. “Vaccinating tigers is hard to do, but our research shows that immunizing just two tigers within a small population each year can reduce the risk that CDV will cause extinction by almost seventy-five percent.  At least in the Russian Far East, vaccinating local domestic dogs would not be an effective strategy to protect tigers.”

The research, led by Cornell University, the Wildlife Conservation Society and the University of Glasgow, relied on several lines of evidence to build a picture of CDV epidemiology in the tigers’ habitat. Using samples from domestic dogs, tigers, and other wild carnivores, they compared viral genetic sequence data and used antibodies to assess patterns of exposure in each population.

“The taiga forest where the tigers live supports a rich diversity of 17 wild carnivore species” said study co-author Dr. Nadezhda Sulikhan with the Federal Scientific Center of the East Asia Terrestrial Biodiversity of Russian Academy of Sciences. “Our findings suggest that more abundant small-bodied species like martens, badgers and raccoon dogs are the most important contributors to the CDV reservoir.”

Controlling CDV in these abundant wild carnivore populations is not possible, as there are no CDV oral vaccines that could be distributed to these populations through baited food.

That left only one viable possibility — using an injectable vaccine on the tigers themselves. To determine whether currently available CDV vaccines could protect wild tigers, the researchers showed in the laboratory that serum from tigers vaccinated in captivity was able to neutralize the strain of CDV that they had detected in Russia. They then developed a computer model to show that even a low rate of vaccination (two tigers per year) could reduce the tigers’ risk of extinction significantly, at a cost of only US $30,000 per year or less if vaccines are given opportunistically when tigers are captured for routine radio collaring studies.

Gilbert and his colleagues contend that vaccination can be a valuable conservation strategy. As wildlife populations become more fragmented through the effects of habitat

According to study contributor Dr. Sarah Cleaveland of the University of Glasgow, “This work shows that CDV in the Amur tiger is a solvable problem — a rare piece of good news for the tiger conservation community.”

A version of this story also appears on the Cornell Chronicle.