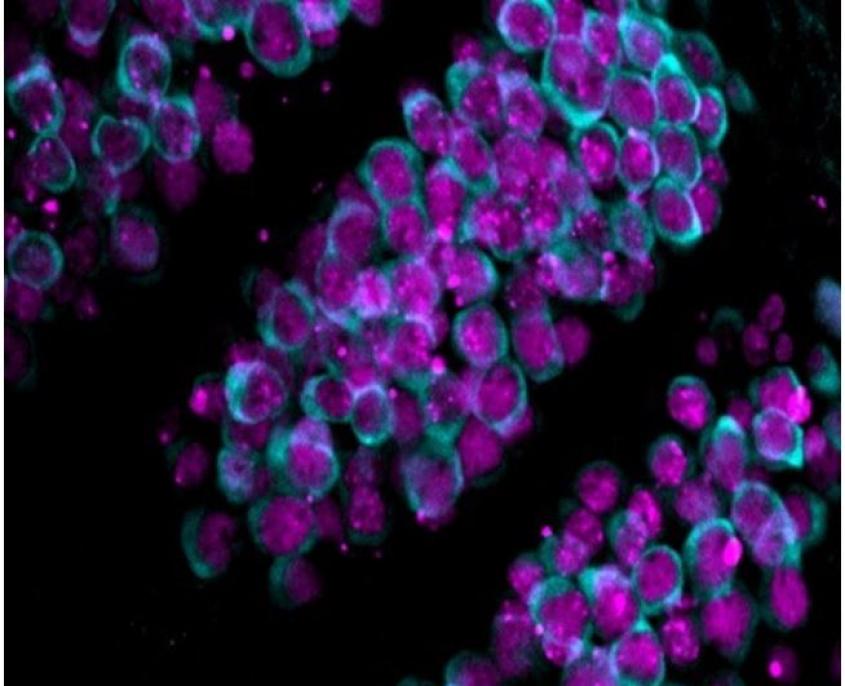 A lot can go wrong when cells mutate — but when the mutation happens to the sperm or egg cells of a fetus, the seeds of future generations are in peril. Fortunately, these important cells are mysteriously resistant to mutations caused by DNA damage, which readily occurs in other types of cells in the adult body. Uncovering how these cells avoid birth defects and encourage healthy genetic lineages is the subject of a recent study published in the journal Genes and Development by College of Veterinary Medicine researchers.

The stakes are high for primordial germ cells (PGCs) — the stem cells in a growing fetus destined to become sperm or eggs. At the earliest embryonic stages, their population roughly numbers only 45 cells. They then migrate to their future home where the gonads will develop and proliferate at a staggering rate — doubling their population nine times in the span of seven days. They will reach a new number of approximately 25,000 cells, a rapid expansion that leaves the germ line highly open to risk — any mutation that occurs in the early PGCs would be copied and propagated in every subsequent doubling of the cells.

However, mutations in the final products of these cells — sperm and eggs — are relatively rare. “Remarkably, germ cell mutations occur roughly ten to one hundred times less than they do in non-germline cells,” says Dr. John Schimenti, professor of genetics in the Department of Biomedical Sciences, who co-authored the paper with graduate student Jordana Bloom, Ph.D. ’20.

Clearly, biology has arranged a way to protect germ cells from DNA damage that would have devastating impacts on fitness of offspring and the species’ survival. The researchers set out to uncover why.

To better understand these mutation-resistant cells, Schimenti and Bloom examined PGCs within embryos of pregnant mice exposed to radiation. They found that the radiation destroyed 40 percent of the cells. “These cells are amongst the most sensitive cells in the body,” says Schimenti. The surviving irradiated PGCs that had not yet entered the sex-determination period of development lacked a safety mechanism, known as the G1 cell cycle checkpoint, that stops DNA-damaged cells from moving forward into the next phase of the cell replication process, called ‘S phase,’ during which a cell’s DNA is duplicated.

“That may seem counterintuitive,” says Schimenti. “Why would these cells be allowed to plow right through that safety checkpoint and into the S phase?” However, he explains that this lack of a stop-and-repair mechanism is actually a self-destruct failsafe. These damaged cells move forward through the replication process, snowballing into such catastrophic dysfunction that they destroy themselves. “This is a preferable outcome compared to trying to repair DNA damage at the G1 checkpoint and possibly allowing imperfectly-repaired cells to continue on through development.”

To further pinpoint the failsafe mechanisms at play, the researchers examined mice that were genetically engineered to lack one or both of two important damage control genes — p21 and Fancm, both vital to DNA damage repair and mutation avoidance in most cell types, including PGCs. Mice that lacked the Fancm gene had markedly fewer germ cells at birth, while mice that lacked both Fancm and p21 had more — but these were riddled with genetic mutations.

“When a cell replicates DNA during S phase, things can go wrong,” says Schimenti. “The Fancm gene is crucial for detecting errors during this phase and helps to repair them. But if a cell lacks Fancm and can’t do those repairs properly, p21 comes in and either triggers cell death or slows them down. These two mechanisms are pretty important for maintaining the genetic integrity of our germ cell pool.”

Schimenti and Bloom illuminate the fine-tuned quality-assurance system that keeps mutations from running amok in these critically important embryonic cells. Their next steps are to characterize what other important repair and safety checkpoints function in PGCs and other stages of germ cell development.

“Ultimately, what we’d like to know is what stage of reproduction is the most susceptible to damaging mutations, what mechanisms are in place to prevent them and how we might use this information to minimize birth defects from natural or environmentally-induced genetic mutations,” Schimenti says.