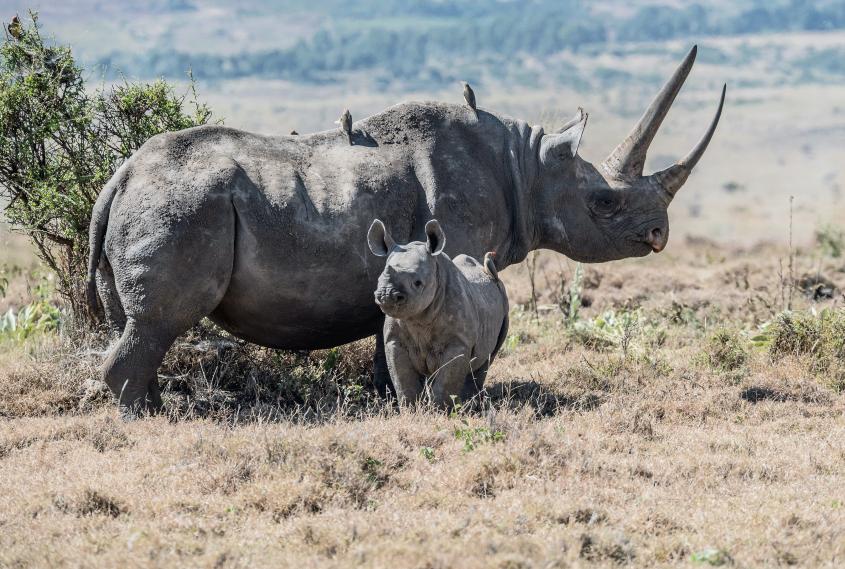 To keep rhinos safe from poaching and to distribute individuals across habitats so that their gene pools stay healthy, management teams must often tranquilize rhinos in remote areas that cannot be accessed by roads or automobiles — this often leaves one option: airlifting the giant mammals out with a helicopter. Photo: David Clode on Unsplash

When it comes to saving endangered species of a certain size, conservationists often have to think outside the box. This was reinforced by a recent study published in the Journal of Wildlife Diseases, led by Cornell University College of Veterinary Medicine faculty, which analyzes the effects of hanging tranquilized black rhinoceroses upside-down by their feet.

“We found that suspending rhinos by their feet is safer than we thought,” says Dr. Robin Radcliffe, senior lecturer in wildlife and conservation medicine and first author on the study.

While this finding might sound comical, it is vital information for conservationists working to save these vanishing creatures. To keep rhinos safe from poaching and to distribute individuals across habitats so that their gene pools stay healthy, management teams must often tranquilize rhinos in remote areas that cannot be accessed by roads or automobiles — this often leaves one option: airlifting the giant mammals out with a helicopter.

While this technique of moving rhinos from place to place has been used for 10 years, no one had scientifically documented the clinical effects of the practice on the animals during transportation or any potential negative effects it may have on them once they wake up.

Radcliffe and his colleagues were mindful of the fact that the anesthesia drugs used to tranquilize these large mammals can be dangerous. “These drugs are potent opioids — a thousand times more potent than morphine, with side effects that include respiratory depression, reduced oxygen in the blood and higher metabolism,” says Radcliffe. “These side effects can impair rhinoceros health and even lead to mortalities during capture and translocation.“

Radcliffe and his colleagues predicted that hanging rhinos upside-down would exacerbate the dangerous effects of these opioids. Horses in this position suffer from impaired breathing likely due to the heavy abdominal organs pushing against the lungs and chest cavity. Therefore, the researchers predicted that this method was riskier than transporting the creatures via a platform or sledge with the rhinos laying on their side.

To set the question to rest, Radcliffe and his colleague Dr. Robin Gleed, professor of anesthesiology and pain medicine, collaborated with Namibian conservationists to conduct a field study of the highly endangered animals while anesthetized in two different positions: hanging by their feet from a crane to mimic the effects of air transport, or laying on their side as they would during the immediate period after darting and transport on a sledge.

They traveled to Waterburg National Park in Namibia, where they examined 12 rhinoceroses that were being captured for procedures related to conservation but not being moved. After tranquilizing the animals by darting from a helicopter, the scientists took measurements on each animal while it was on its side or suspended by its feet from a crane. By testing each rhino in both positions, the team was able to make direct comparisons of breathing and circulation while the rhinos were hanging upside down or lying on their sides.

The data debunked Radcliffe and his colleague’s predictions — that hanging upside-down by the feet was worse for rhinos’ pulmonary function than laying on their sides. In fact, the rhinos actually fared slightly better when slung up in the sky.

“Hanging rhinos upside-down actually improved ventilation (albeit to a small degree) over rhinos lying on their sides,” Radcliffe says. “While this was unexpected, and the margins small, any incremental improvement in physiology helps to enhance safety of black rhinoceros during capture and anesthesia.”

While this is good news for conservationists working with black rhinos in rugged terrain, Radcliffe says that more information is needed. “Our next step with this research is to extend the time that subject rhinos are suspended upside down to mimic the helicopter-assisted aerial transport of rhinos in the real world,” he says, noting that in the remote habitats of Namibia, helicopter air-lifting of rhinoceroses is often required for up to 30 minutes. “Now that we know that it’s safe to hang rhinos upside-down for short periods of time, we’d like to make sure that longer durations are safe as well.”