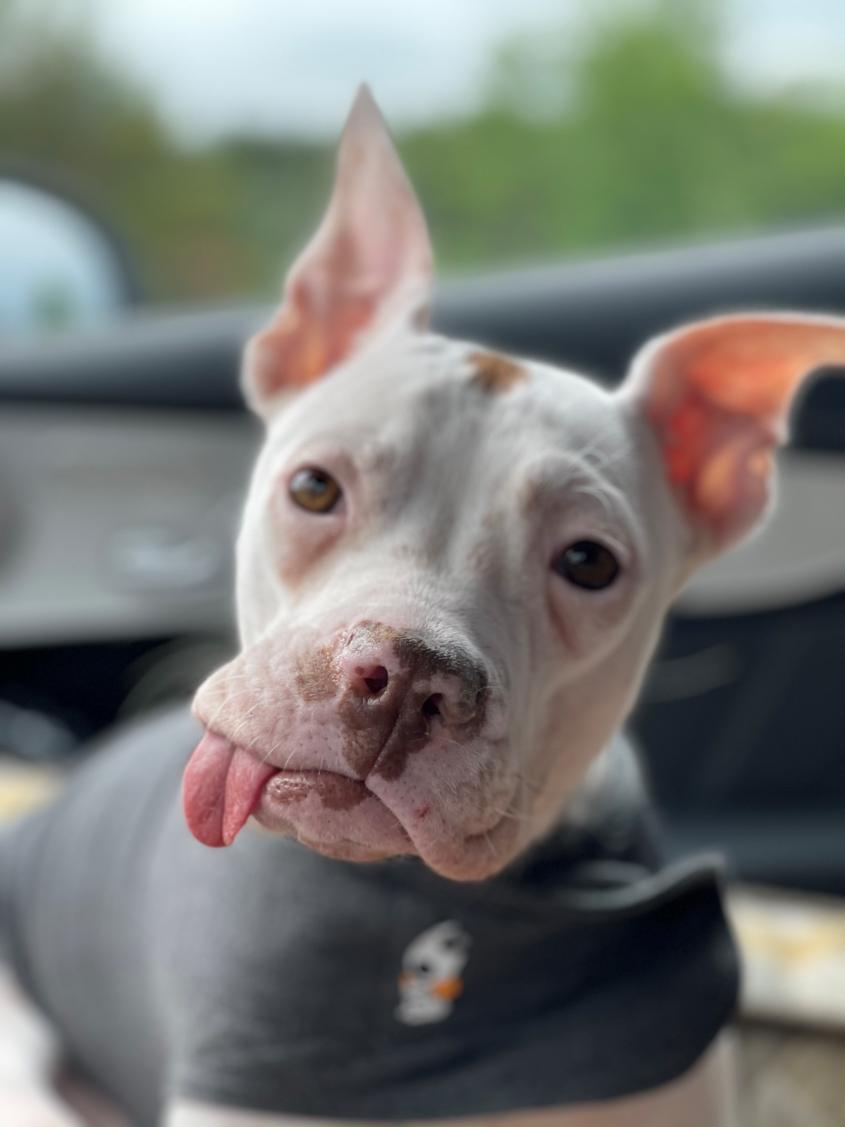 Nutmeg faced several health issues early on in life, but is thriving thanks to her owners and Cornell clinicians. Photo provided.

This story was written by Dr. Shanna Landy, a Dentistry and Oral Surgery resident at the Cornell University Hospital for Animals who managed Nutmeg’s case first-hand.

When Nutmeg was born, she already had a massive medical mountain to climb.

The pit bull mix was born with a cleft palate, and within hours of birth she contracted pneumonia secondary to her inhaling milk through the roof of her mouth. Her prognosis was grim – but a year later, Nutmeg is living a happy, if somewhat toothless life, thanks to the aid of veterinarians at the Cornell University Hospital for Animals (CUHA).

Soon after birth, Nutmeg was brought to the Mr. Mo Project, a non-profit dog rescue organization run by Chris and Mariesa Hughes from their home out of Clifton Park, New York.

Partnering with their local veterinarian, the Hughes family immediately started intensive nursing care for Nutmeg, including giving her antibiotics, maintaining an oxygen-supplemented kennel, and feeding her through a small rubber tube every two to three hours to reduce her risk of further inhalation of food and water.

Nutmeg also had other medical concerns that required careful monitoring and management: an infection in both eyes, requiring surgery; a potentially malformed windpipe; and an abnormal gait that initially caused her to walk backwards to move around her environment.

Nutmeg persevered through these health issues, and at eight weeks old, came to CUHA for evaluation. She was seen first by the Dentistry and Oral Surgery Service to discuss treatment for her cleft palate, which had the highest risk of posing life-threatening problems. Her care team found multiple oral, neurological, and ophthalmological abnormalities, and in consultation with the Hughes family, treated what they could given Nutmeg’s age and size. The CT scan mapped out the size and shape of the abnormal gaps in Nutmeg’s hard and soft palates, confirming that surgery was necessary to fix the issues. However, due to Nutmeg’s other systemic concerns, she needed to grow and improve in her overall health before embarking on such a big surgery.

Clinicians agreed to reassess Nutmeg’s cleft palate at six months of age, after her baby teeth would be shed and her adult teeth grown in, which would allow for a multi-stage surgery to maximize the chances of successful treatment. In the meantime, the Hughes’ continued supportive care for Nutmeg at home, including hand-feeding, offering her water in a shallow dish and monitoring her for any breathing difficulties or other signs of aspiration pneumonia.

Over the ensuing several months, Nutmeg faced many challenges to her overall care. Her lower baby canine teeth started to cause trauma to her palate, so she was placed under general anesthesia to extract them. Food became packed into her palatal cleft several times, necessitating placement of a feeding tube in her esophagus to provide a way to feed her while bypassing her mouth. However, Nutmeg’s feeding tube became clogged, and she had a repeated episode of aspiration pneumonia, requiring admission to Cornell’s Critical Care Service for intensive medical treatment.

Although concerned that Nutmeg’s neurological issues might affect her quality of life, the Neurology Service ultimately agreed that the issues with her cerebellum, the area of the brain that coordinates movement, would not affect her overall happiness.

One dental extraction surgery later and Nutmeg was finally ready for the definitive stage of her cleft palate repair surgery, at approximately eight months old. The puppy returned once again to the Dentistry and Oral Surgery Service, where she had two different forms of surgery done in a single procedure. First, her soft palate was brought together and directly connected in three separate layers. Next, her hard palate defect was closed in two layers: a reverse pedicle "trap door" flap was made on one side of the soft tissues and swung on its "hinge" to create the first layer, then a second transposition "blanket" flap was made on the opposite side of her palate and drawn over the "trap door" layer to create a second layer. Although the surgical techniques used are quite complex and require a high level of precision, the Cornell team was able to perform them without any major complications.

Nutmeg was bright and alert soon after surgery and was back to acting like her rambunctious self. Even so, when Nutmeg returned for her two-week recheck exam, veterinarians found two small regions where the surgical repair had come apart. This is a common complication that occurs to some degree in about 50% of patients who undergo cleft palate repair. Because Nutmeg was getting water trapped behind one hole at the back of her hard palate while drinking, further surgery was needed. Every surgery done on the palate creates more scar tissue that is less elastic and more fragile, so each subsequent surgery is more difficult.

Nutmeg returned about six weeks later so that veterinarians could close the two defects. At her recheck, Nutmeg’s care team was relieved to see complete healing of her oral surgery sites and no further surgery would be needed, as her cleft palate was completely repaired.

With this monumental process now behind her, Nutmeg can now live without the constant worry of nasal irritation or aspiration pneumonia. In the meantime, she has been a wonderful learning case for the Cornell students who worked with her during her time with the different services along the way: Dentistry and Oral Surgery, Neurology, Ophthalmology, Anesthesiology, Diagnostic Imaging, Emergency and Critical Care.

Nutmeg is now a well-recognized and very special patient at Cornell, and we wish her the best of health and continued progress and she continues to grow, learn, and inspire.