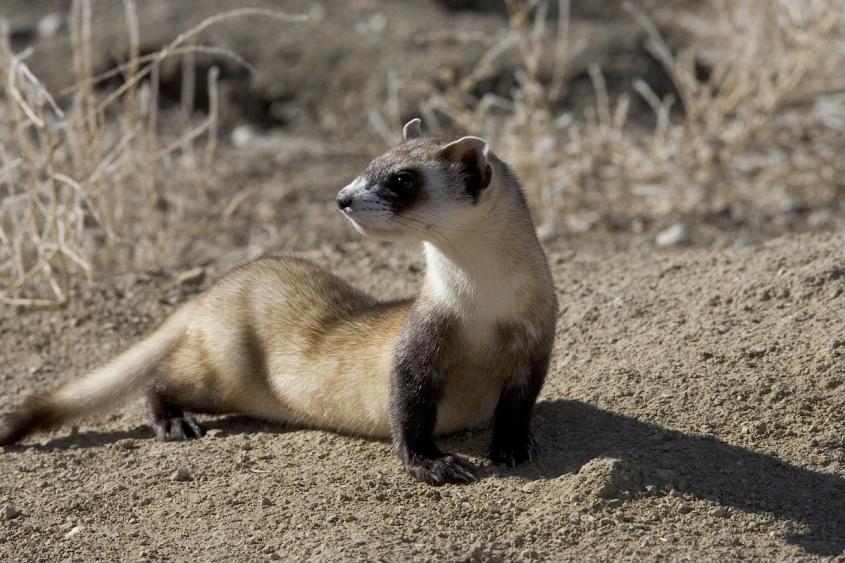 Despite conservation efforts, only around 370 black-footed ferrets remain in the wild. Photo: Pixabay

By testing easier-to-study coyotes, researchers from the Cornell Wildlife Health Lab at the College of Veterinary Medicine, in collaboration with the Cheyenne River Sioux tribe, have identified a range of lethal diseases threatening black-footed ferrets – one of the most endangered animals in North America.

Despite conservation efforts, only around 370 black-footed ferrets remain in the wild. Seeing continuing population declines in South Dakota, the tribe reached out to the Cornell Wildlife Health Lab to investigate potential infectious causes of this decline using coyotes as a ‘sentinel species’ – a term for animals that are easily reached, studied and monitored for signs of disease that might affect more reclusive or fragile species.

“It’s an approach we use pretty commonly for wildlife because access to samples is so challenging,” said Dr. Krysten Schuler, assistant research professor in the ­­Department of Population Medicine and Diagnostic Sciences and lead author on the study, “Sentinel Coyote Pathogen Survey to Assess Declining Black-Footed Ferret (Mustela Nigripes) Population in South Dakota, U.S.A.,” published in March in the Journal of Wildlife Diseases.

Multiple pathogens have the potential to impact black-footed ferret populations. Yersinia pestis was introduced to North America at the start of the 20th century and has been devastating for both prairie dogs and black-footed ferrets, which have little natural immunity to this nonnative disease. Black-footed ferrets are also highly susceptible to canine distemper virus. Additionally, researchers evaluated the prevalence of West Nile virus, tularemia and canine heartworm.

“Everyone focuses on plague, but this can make us a bit myopic; doing these health screenings can open our eyes to other potentially important pathogens,” Schuler said.

Coyotes are useful as sentinels due to their exposure to multiple species of rodents, as well as directly to black-footed ferrets through predation. The use of other sentinel species for disease surveillance among endangered animals is an important conservation tool, Schuler said.

“Black-footed ferrets are nocturnal and trapping them to collect blood samples is difficult and can lead to significant stress, not ideal for an endangered species,” said extension associate Dr. Rachel Abbott, an author on the study.

While the study does not name a definitive cause of the decline in this population of black-footed ferrets, it highlighted the range of pathogens that may be affecting them as well as other species in the ecosystem.

The black-footed ferret is a nocturnal ferret native to grasslands of the central United States, Canada and northern Mexico. It was thought to be extinct by 1979, due to infectious disease, poisonings and habitat loss from crop and livestock agriculture. However, in 1981, a small population of wild black-footed ferrets was discovered in Wyoming.

By 1987, all 18 had been brought into captivity to serve as the founder population for a captive breeding and reintroduction program. State and federal wildlife agencies, nongovernmental organizations, zoological institutions and Native American tribes continue to collaborate on this conservation effort. As of 2018, more than 4,300 black-footed ferrets have been released throughout the United States, although only approximately 370 remain.

The research team says further studies are necessary. For example, while West Nile virus affects other mammals, it has not been documented in black-footed ferrets, so their susceptibility to the disease is unknown. “West Nile virus is often thought about as a pathogen in birds, but its importance in mammals might deserve more consideration,” Schuler said.

A version of this story also appeared in the Cornell Chronicle and with the Cornell Wildlife Health Center.