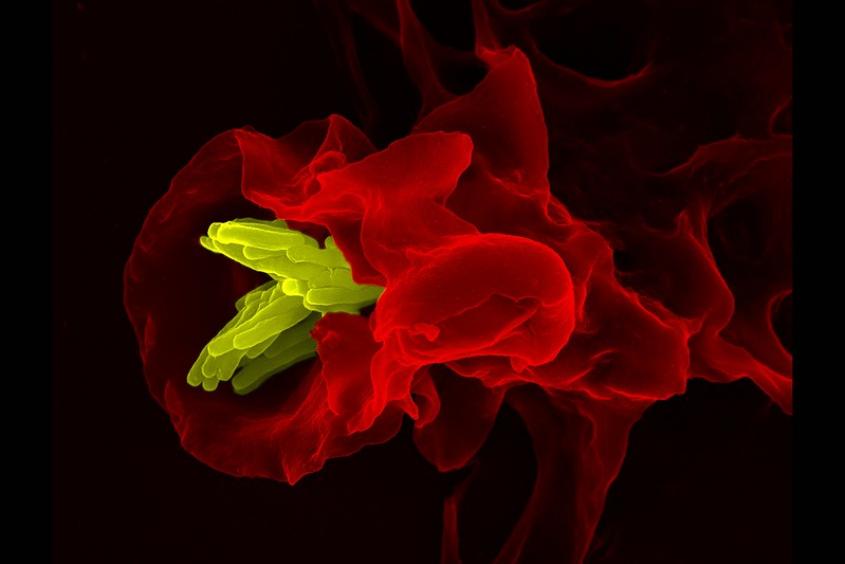 The new grant will enable Russell and his team to chart how different drugs affect tuberculosis-causing bacteria as well as help different populations of host immune cells fight off the infection. Here, a macrophage engulfs tuberculosis bacteria. Photo: Zeiss Microscopy

Dr. David Russell, the William Kaplan Professor of Infection Biology in the Department of Microbiology and Immunology at Cornell University, has been awarded a $2 M grant over four years from the Mueller Health Foundation (MHF) to efficiently develop novel treatment regimens for tuberculosis.

While tuberculosis (TB) may often be seen as a disease of the past, it is still one of the deadliest infectious diseases in the world today. According to WHO, in 2019 alone 1.4 million died from tuberculosis and currently 1.8 billion people around the world have been infected with TB. In the United States, as many as 13 million people have asymptomatic latent tuberculosis.

“Alarmingly, due to misuse of antibiotics, strains of tuberculosis have developed which are partially or already completely resistant to currently available treatment options,” says Dr. Peter Mueller, president of MHF. “Drug-resistant TB cases are on the rise, even in developed nations like the US and call for new treatment modalities.”

The grant comes on the heels of Russell’s paper published July 22 in the Journal of Experimental Medicine, which established a novel method to analyze how individual immune cells react divergently to the bacteria that cause tuberculosis (Mtb).

“The translational nature of Russell’s work makes it a natural fit for the Mueller Health Foundation, an organization that supports solutions to find cures for debilitating infectious diseases across the globe, particularly drug-resistant tuberculosis,” says Mueller. “We at the MHF believe that the succinct integration of host immune responses into traditional antimicrobial research offers a potentially paradigm shifting opportunity to identify and develop urgently needed, novel, more effective, accessible and affordable treatment regimens with significantly improved tolerability for all forms of tuberculosis.”

“We’re excited that the foundation sees value in this work,” says Russell. “With their support, we’re going to be able to drive our findings even closer toward potential live-saving therapies.”

The grant will enable Russell and his team to chart how different drugs affect tuberculosis-causing bacteria as well as help different populations of host immune cells fight off the infection.

“We hope that performing this analysis with known frontline drugs, as well as novel compounds under development, will enable us to create a drug action database,” says Russell. “That database could then allow rational drug regimens to be designed by computer simulation prior to the more arduous task of in vivo testing and clinical trials.”

“We know that anti-tuberculosis drugs are less active in vivo, and that the bacterial heterogeneity is a major driver of differential drug susceptibility and tolerance,” Russell says.

Russel’s approach tackles that issue head-on: First, they infect mice with fluorescent Mtb, which glow to indicate their fitness levels. These mice are then treated with known drugs, and their immune cells are analyzed using a single-cell profiling to determine the relative sensitivity of the intracellular bacterial populations to those drugs.

“The goal is to identify drug combinations that more effectively provide coverage across the heterogeneous bacterial population,” says Russell. “We are starting with known drugs, but we want to move this forward to include our new metabolic inhibitor compounds that we believe target specific bacterial populations.”

In the first two years of the grant, Russell’s team plans to test four front-line tuberculosis drugs, and several new emergent drugs. “We anticipate that these data will reveal which Mtb populations are most susceptible, and which show the greatest insensitivity to established drugs,” says Russell. “It will also provide information as to the relative kinetics of clearance of the bacterial populations in an in vivo infection.” In parallel, the team will also investigate new compounds using this approach.

After Russell’s team has established the efficacy of each drug against the different bacterial subpopulations in vivo, they will then identify compounds that in combination have the potential to provide improved coverage across the entire Mtb bacterial population with their varying defenses and susceptibilities.

“Along with these experiments, we will also investigate epigenetic inhibitor molecules that may help boost immune cells’ abilities to control infection, or to modulate the host cell environment and increase drug susceptibility of the bacteria. We are screening a small library of 720 different epigenetic inhibitors to determine whether immune cell physiology/metabolism may be modified to enhance the activity of anti-tuberculosis drugs,” says Russell.

In the final stage of the grant, Russell plans to design defined drug/drug combinations that provide improved efficacy in fighting Mtb in mouse models. If these experiments go well, the team would examine the drug regimens in human immune cells gathered from human tuberculosis patients, which would pave the way to development of human therapeutics.

“It’s very exciting to be able to tackle this disease from every angle,” says Russell. “Thanks to the Mueller Health Foundation, we are able to move forward with a strategy which we believe will generate real solutions for patients in the not-so-distant future through the optimization of combinatorial treatment with ready approved drugs.”