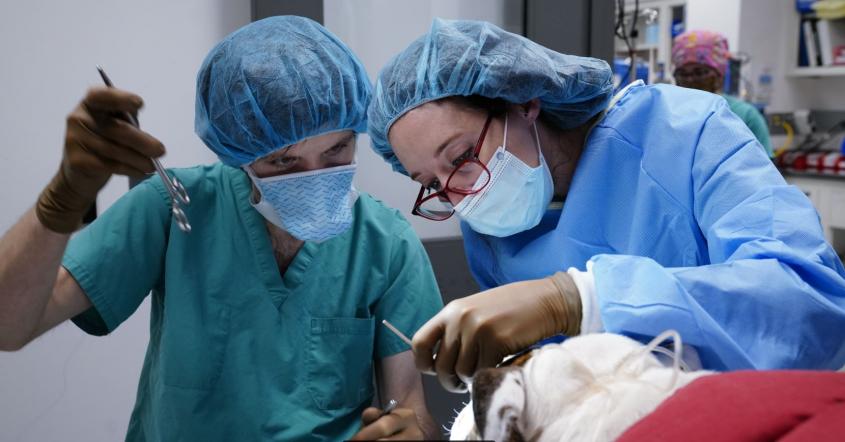 Dr. Nicole Buote does not shy away from a challenge. In fact, the associate professor in the Cornell University College of Veterinary Medicine’s department of clinical sciences, section of small animal surgery, has actively pursued a demanding career path in minimally invasive surgery (MIS). Her dedication was recently recognized by the American College of Veterinary Surgeons (ACVS), which awarded her the title of ACVS Founding Fellow, Minimally Invasive Surgery (Soft Tissue).

With this designation, ACVS – the specialty board that certifies veterinarians in large and small animal surgery – seeks to identify experts who have obtained training and experience in MIS beyond surgery residency training and who in their work and research focus heavily on the prevention, diagnosis, treatment, and rehabilitation of patients undergoing MIS therapies. (Common uses for MIS currently include spays, gastropexy – suturing the stomach to the body wall – and gallbladder removals.) Thus far, 18 ACVS diplomates have earned the Founding Fellow title in the small animal soft tissue specialization.

Buote, who became part of the CVM faculty in August 2020, is the first founding fellow in the small animal category at Cornell – joining professor Eileen Hackett in the ACVS’s prestigious recognition. Hackett, a department of clinical sciences colleague who specializes in large animal surgery, was awarded the title of ACVS Founding Fellow in Minimally Invasive Surgery Large Animal Soft Tissue (Laparoscopy and Thoracoscopy) in 2017 while serving as an associate professor of equine surgery at Colorado State University.

“This means the world to me, I have worked so hard to achieve this goal,” said Buote, who earned a B.S. in biotechnology from the Worcester Polytechnic Institute in 2000 and her D.V.M. at the Tufts Cummings School of Veterinary Medicine four years later. She completed rotating and surgical internships at the Angell Animal Medical Center in Boston and the Dallas Veterinary Surgical Center, respectively. When Buote emerged from her residency in surgery from the Animal Medical Center (AMC) in New York City in 2009, today’s one or two-year fellowship programs in MIS did not yet exist.

“I feel so proud I was able to gather the experience required for the ‘founding’ status in an unconventional way,” Buote said. “Most founding fellows are in academia, but until recently I was in private practice, where it’s very difficult to produce research and find the time to lecture and teach – but I did it.”

Up for a challenge

Buote first became excited about MIS during her residency. “I was drawn to it for the challenge – it is more difficult to operate with long small instruments in a confined space – and the obvious benefits to the patient,” Buote explained. The animals experience less pain, fewer infections, and smaller incisions. AMC also instilled in Buote a love of clinical research and publishing, an area where she distinguished herself through her productivity.

Eager to delve more deeply into MIS, Buote found mentors in the field, among them Boel Fransson, professor of veterinary clinical sciences at Washington State University, and Lynetta Freeman, emeritus professor of small animal surgery at Purdue University. (Both are also ACVS Founding Fellows.) “They have been an inspiration to me over the years,” Buote said. “I didn’t know either of these doctors personally before asking them for advice and they took the time to help me and have become staunch supporters over the years. I would encourage every doctor to be brave and ask for help and don’t feel embarrassed to reach out to people outside your direct sphere, because you might find a lasting relationship.”

Buote brought her surgical skills first to the California Animal Hospital Veterinary Specialty Group and, two years later, to VCA West Los Angeles. As chief of surgery for six of her nine years at the latter, she created a minimally invasive and interventional radiology service and restarted and redesigned a residency program.

After more than a decade in private practice, Buote realized that she preferred to teach and conduct clinical research away from the pressure of making money. At Cornell, she has jumped whole-heartedly into academia, working on robotic simulation and training as well as two bariatric projects – a laparoscopic gastric sleeve to help with obesity and diabetes in cats, and a robotic gastric bypass study to reverse obesity in dogs – and several studies with residents regarding pre-stretching the abdomen during laparoscopy, sterilization of laparoscopic instruments, and telescopic imaging of the biliary tract.

In the long run, Buote hopes to greatly expand the use of MIS. “We haven’t really added much in the last five years to the list of procedures we can do,” she explained. “I am excited to push the envelope and do more types of procedures and in smaller pets.” Perhaps her biggest passion is to establish surgical robotics in veterinary medicine, which would add the benefits of improved dexterity and flexibility in instrumentation. “That would really take us to the forefront of minimally invasive surgery,” she said – not only in veterinary medicine. “I think work we do can directly translate to pediatrics, and we can help innovate equipment and instruments sometimes for smaller spaces, which can help our human counterparts,” she said.

To move towards these goals, Buote would like Cornell to become one of only five sites in the country and the only one in the Northeast to offer an MIS fellowship to post-residency graduates, allowing her to increase her MIS case load in both breadth and depth. “I am hoping the founding fellow status will help us more aggressively recruit cases and get residents interested in MIS, as well as supporting us in obtaining grant funding and collaborations with other doctors and industry,” she said.

Tim Hackett, chair of the department of clinical sciences, has every confidence in his colleague. “I am thrilled to see Dr. Buote recognized for this achievement by the ACVS,” he said. “Cornell has a strong history of surgical innovation in both small and large animal surgery. Dr. Buote’s work in MIS and robotics will position our program for continued to leadership in advanced surgical techniques.”