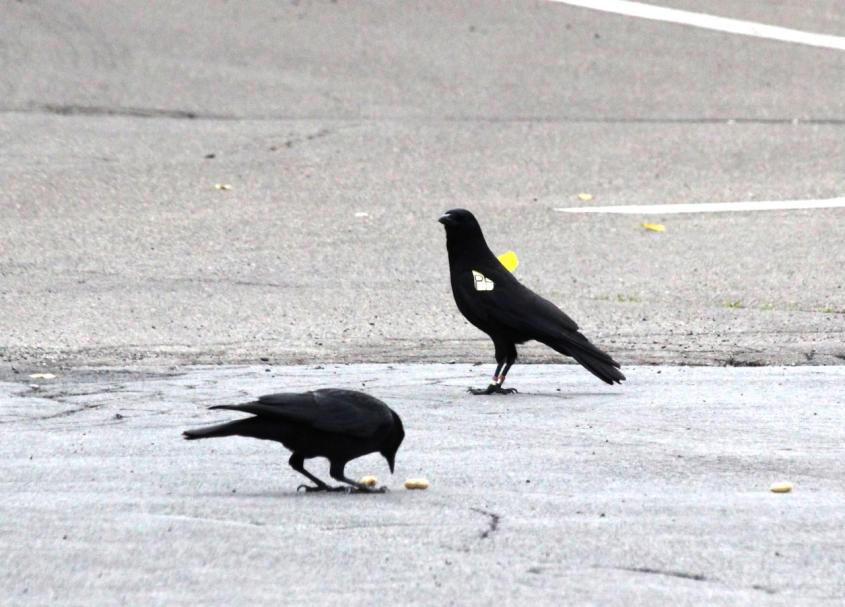 A new publication from Cornell details the crows’ survival and the species’ possible adaptation to West Nile virus. Here, one of the surviving crows forages with its offspring. Photo: Dr. Anne Clark

West Nile virus may no longer be a death sentence to crows. In a new study from the College of Veterinary Medicine, wildlife experts describe successfully treating and releasing five American crows infected with the deadly disease. These are the first known crows to survive West Nile virus.

“Their survival may indicate a change in the immunity of crows or a shift in the behavior of the virus,” said Dr. Cynthia Hopf-Dennis, clinical assistant professor at the Janet L. Swanson Wildlife Hospital and first author on the paper.

The paper, published May 2 in the Journal of Avian Medicine and Surgery, details the crows’ survival and the species’ possible adaptation to the virus. The authors were also able to track the crows’ immune response during their time in the hospital, finding that the birds shed the virus in respiratory secretions for at least 93 days after being infected. This is an important discovery that demonstrates they can both pass it to others and be tested via this method for those 13 weeks after infection.

“It is an interesting interaction we know is occurring uniquely in different species. I suspect there are more around the country that are surviving,” Hopf-Dennis said. “It’s likely that our North American species are adapting to the virus, and I would not be surprised if the virus, too, is adapting to the species it has encountered over the last 20 years.”

The first known cases of West Nile virus in the United States were detected in 1999, when an outbreak in New York City caused a 45% decline in regional American crows. Since the initial spread of the virus, its severity across North America has fluctuated because of a multitude of vector, host and environmental factors that are still not completely understood.

Transmitted by mosquitoes, West Nile virus can infect over 250 species of birds, but is most deadly to corvids and raptors. These groups include American crows, blue jays, ravens, eagles, hawks and owls. The virus causes severe dehydration, acid-base and electrolyte imbalances, cellular injury, multiorgan inflammation and necrosis. Infected birds may look fluffed, weak and seem unable to fly. Infections typically occur during spring, summer and early fall, when mosquitoes are more prevalent. Among corvids, West Nile virus is most lethal to American crows, which had a previous mortality rate of 100%. A contributing factor is the bird’s communal roosting lifestyle. After a mosquito infects the crow, the crow sheds large amounts of the virus in its feces, which can influence bird-to-bird transmission during roosting.

West Nile virus can infect mammals as well as birds, notably horses and humans, which are considered dead-end hosts. Cases among people vary from year to year and can be fatal. In 2020, 33 people out of a known 540 infections died from West Nile virus.

The study covers American crows admitted to the Janet L. Swanson Wildlife Hospital from 2013-2020. During that time, 32 crows were admitted to the hospital, 25 of which tested positive for West Nile virus. Of those 25, only the five American crows detailed in this study survived to release. The first two crows presented in September 2017, the third in October 2017, and the fourth and fifth in August 2018.

While there is no cure or prescribed treatment for birds suffering from West Nile virus, the five survivors at Cornell received supportive care, including fluid therapy, anti-inflammatory medication, B vitamin supplementation, prophylactic antifungals and antiparasitic medications. This is the gold standard approach for birds afflicted with the disease, though it might vary depending on a hospital’s resources. The birds were regularly tested for the virus after infection, which was present in one bird as a “suspected positive” 93 days later.

“This 93-day period is a longer interval of shedding than previously reported for American crows,” Hopf-Dennis said. “More frequent testing would be helpful in future cases to track how long birds shed West Nile virus.”

Although there is a vaccine for captive birds, the level of immunity varies by species, and widespread vaccination of wild birds is not feasible. “Their most important protection will be whatever maternal immunity the crows can pass to their offspring,” Hopf-Dennis said. “My hope is that when we return crows to the wild after treatment and rehabilitation, they are able to contribute to a stronger population that is able to survive the virus and provide some level of protection to their offspring.”

The study’s co-authors include Dr. Elizabeth Bunting, associate professor of practice in the Department of Public and Ecosystem Health; Sara Childs-Sanford, D.V.M. ’99, assistant professor in the Section of Zoological Medicine and section chief of the Janet L. Swanson Wildlife Hospital; and Dr. Anne Clark, Bartle Professor in the Department of Biological Sciences at Binghamton University.

To discover how much of the virus has mutated, further work must be done to isolate it, but overall, the documented survival of these crows is good news for other birds that are susceptible to the disease.

Said Hopf-Dennis, “For other wildlife rehabilitators and veterinarians who have experienced the 100% mortality rate that is historic of crows infected with West Nile virus, this study reminds us that they are worth treating, can survive to release — and can thrive in the wild even after infection.”