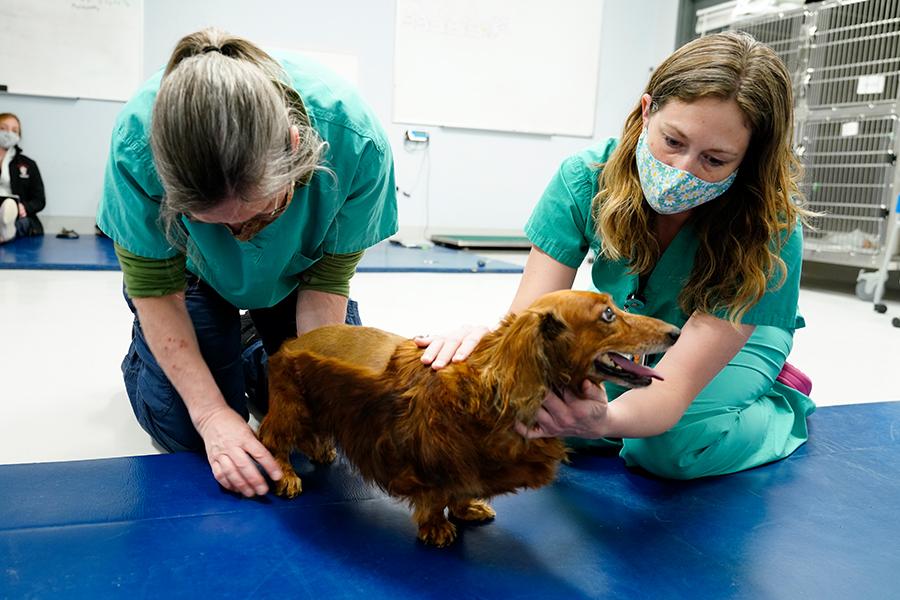 The Cornell University Hospital for Animals’ board-certified veterinary neurologists and neurosurgeons are experts in diagnosing, treating, managing neurologic disorders. They have access to specialized equipment that includes an MRI and work closely with specialists throughout the hospital to ensure comprehensive care, from diagnosis to treatment to rehabilitation and post-operative care. Our state-of-the art diagnostics and imaging options enhance our abilities to diagnose difficult and complex diseases.

Juicebox joined our family when he was around 18 months old and is a snuggly lil’ love bug at home who enjoys having his nails trimmed and happily takes medications of all sorts. But he has always struggled mightily going to the veterinarian. Our experience at Cornell, and particularly with the neurology and dermatology teams, was amazing. Everyone was kind and patient and worked with Juicebox in a way that really considered his comfort levels.  We are SO appreciative to everyone who worked with him. You all made a stressful time when we were worried about Juicey’s health so much easier to handle because of your compassionate care. So very thankful for Dr. Korff and her staff for taking such great care of Ms. Bean. Bean was diagnosed with autoimmune disease a year ago and continues to improve under their care. When Cappy—my beloved 14-old year old calico—was suddenly unable to walk straight or control her facial muscles enough to eat, I rushed her to Cornell’s Companion Animal Hospital. The doctors recommended an MRI, and I was utterly devistated to learn that she had an inoperable brain tumor. The members of the Neurology and Neurosurgery were wonderfully compassionate and devised a robust treatment plan but, of course, I understood that Cappy’s time with me was very limited…

That was more than two-and-a-half years ago. I was thrilled when Cappy showed tremendous signs of improvement mere days after I started her on medication. With regular check-ups and dosage tweaks, Cappy continues to do well: playing, snuggling, and begging for treats. I'm grateful for every single day I have with Cappy, and I owe this time to the talent, caring, and attentive staff of the Neurology team—most especially Dr. Sandler! 803 days St. Andrews has been seizure free after spending six days under the care of Cornell's Neurology Department. At the time he was initially treated, he was just under two years of age and had been having occasional seizures that had progressed to cluster seizures. Our veterinarian was in the process of making a referral to Cornell when St. Andrews went into status epilepticus. We rushed him to our closest emergency service. They contacted Cornell and were connected with the neurologists who provided specific instructions on how to stabilize him. They were able to reduce his temperature which was a critical step in his safe transport. Upon arrival at Cornell, we were met at the door and they started working on him immediately. All total, his seizure activity lasted 12 hours. We didn't have much hope for survival, let alone a return to "normal." We were consulted regarding the initial diagnostic work up and his treatment plan. Over the next 6 days, we were contacted by Dr. REbecca Sandler or one of her students at least twice a day. We were kept informed of his progress and truly felt the care was excellent, but also began to feel the staff were emotionally invested in our dog. When we picked up St. Andrews at discharge he was very lethargic and semi ambulatory and in a "Hold 'Em Up Harness." Although his prognosis was good, we knew it would take time. Dr. Sandleror a student contacted us for several days post discharge to get updates on his progress. I don't think anywone could have totally predicted the outcome. Within 2 days post discharge, he was fully ambulatory and beginning to be come more alert. After a few days at home he started to pester our beagle again. For us, this wa a clear sign that his personality was intact. For us, this was huge. St. Andrews is on several seizure medications to "prevent seizures  but we have a very clear protocol if he does have seizure activity. We have recheck appointments twice a year with Dr. Sandler, who continues to monitor his progress. On the rare occasion we have had questions, we have been able to get prompt responses either by calling or emailing. St. Andrews lives with two other dogs (one is his father) and lives a very normal active life. He loves to travel. His personality is every bit as sweet as it was prior to his hospitalization and he still loves to pester the beagle. We are grateful to Dr. Sandler and the whole Cornell Neurology department for the exceptional care provided. Mickey has been a patient with Cornell's Neurology Service for 5 years.  While it's unfortunate that he suffers from his condition,  we are very lucky that he has been cared for by some of the best, most knowledgeable, and compassionate Veterinarians, Technicians, and Students.  The whole team at Cornell from the Office Staff to Pharmacy are true professionals.  We are grateful for all they have done for Mickey and we continue to place our trust in them for his on-going care. What to expect at an appointment

Your animal will be seen and cared for by one or both of the board-certified neurologists. Because we are a teaching hospital, veterinary students and residents will also participate in caring for your animal with three experienced licensed veterinary technicians (LVTs) assisting and providing additional support during all aspects of the visit, diagnostics and treatment. Veterinary students have graduated from four-year colleges and are in the midst of an additional four years of medical education to become DVMs, or Doctors of Veterinary Medicine. Neurology residents are experienced veterinarians who are taking two to four years of additional training specializing in the neurological diseases of animals, much like residents in human medicine. Our team also provides 24-hour emergency care for animals with immediate neurological and neurosurgical needs. There are many veterinary specialists practicing at our hospital with whom we collaborate as needed for each patient.

When you have a scheduled appointment please bring your pet fasted, meaning no food in the morning prior to the appointment. Allow your pet to have free access to water. The visit begins with the veterinary students on rotation. They will ask you questions about your pets medical history the problem they are experiencing. The student then provides that information to the the neurologists and will take your pet to have a physical and neurologic exam performed. The team will discuss their findings with you along with diagnostic and treatment recommendations. Some components of comprehensive diagnostics and treatment options may require your pet to be anesthetized and thus unavailable the same day. This includes MRI, which we will schedule with our anesthesia and imaging teams as soon as possible. We will always offer you a chance to go home, and discuss the options with other family members. We are here to help and want provide the best care for both you and your pet. Franklin, a 2-year old Golden Retriever, first presented to Cornell University Hospital for Animals (CUHA) emergency service in July of 2020. He had been wobbly, losing some control of his movements (ataxic) and lethargic for several days at home. After being transferred from emergency to the neurology service for further examination an MRI of Franklin's brain was recommended. MRI was performed the next day under general anesthesia. The images captured by MRI revealed marked patchy bright areas in his forebrain and cervical spine. While Franklin was still anesthetized, a spinal tap was performed and a sample of cerebrospinal fluid was sent to the Clinical Pathology lab at Cornell's Animal Health Diagnostic Center. Franklin was diagnosed with Menigoencephalitis of unknown etiology (MUE). He was started on steroids and was able to go home the next day. Patients with MUE often experience seizure activity which was true for Franklin. He began receiving monthly cytosar infusions and anti seizure medication. Cytosar is a well-tolerated and effective chemotherapy to control inflammatory central nervous diseases. Franklin responded well to this treatment plan.

During one of Franklin's regularly scheduled cytosar appointments in the fall it was noted that he had been vomiting and having diarrhea at home. He was lethargic on presentation and had a fever. The neurology service facilitated an initial work up to see what might be going on. Radiographs of his chest showed aspiration pneumonia and an abdominal ultrasound showed blood clots throughout his abdominal veins. He was anemic and his white blood cell count changes were consistent with an infection. Franklin was transferred directly to the internal medicine specialists at CUHA. He received 2 blood transfusions and oxygen supplementation. The supportive care and treatment he received had him feeling much better the next day. He was ready to go home again soon after.

Franklin's health conditions are being well managed at home by dedicated owners and at Cornell by the neurology and internal medicine teams.

We wish Franklin a happy life and love to see that he continues to do so well! Willow, a 5-year-old female spayed Himalayan, presented to the Cornell Neurology & Neurosurgery service in November of 2020.  She could move three of her legs but was unable to walk on her own.  The neurologists recommended Willow have imaging of her cervical spine.  Radiographs of her cervical spine showed an abnormal bony growth in her cervical vertebrae.  She went on to have an MRI and CT scan performed that confirmed there was a fluid filled mass at her C3 vertebrae.  Neurosurgery was performed to reduce the bulk of the mass relieving compression on Willow’s spinal cord.  Samples were submitted to Cornell’s Animal Health Diagnostic Center with a resulting diagnosis of osteosarcoma.

Willow was referred to our colleagues in the Oncology service and began radiation therapy.  Over the last few months Willow has returned for recheck appointments with neurology and oncology. Her follow up radiographs show there are no signs of osteosarcoma regrowth.  Willow has gained the ability to walk around on her own and is getting stronger daily.

We are so happy to work collaboratively with the oncologists in continued support of Willow’s recovery and care.

European College of Veterinary Neurology
The European Society of Veterinary Neurology (ESVN) was founded in 1987 and serves as a forum for persons interested in all aspects of the nervous system of animals, promotes training programs in veterinary neurology and provides an opportunity for collaborative clinical research throughout Europe.

Make an Appointment - Referral not required

Please provide any pertinent medical records and imaging studies such as radiographs, MRI, or CT scans. Your vet can send this information quickly and easily through our referring veterinarian portal, CUHA rVet Connect.