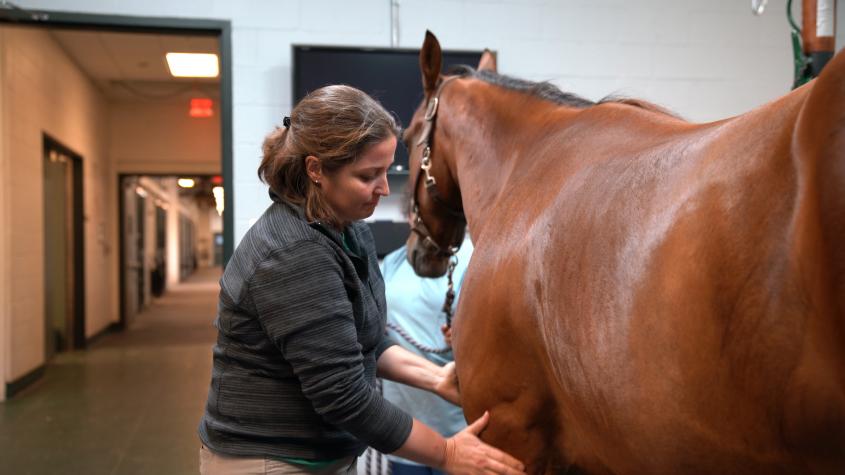 Osteoarthritis affects 240 million people worldwide and is one of the most common causes of disability in both humans and animals.

Currently, no therapeutics exist to prevent this disease, but recent collaborative research at Cornell reveals that the application of a proprietary peptide known as SS-31 may protect cartilage from the injury that leads to arthritis.

Delco is a board-certified large-animal surgeon and assistant research professor in the Department of Clinical Sciences, in the College of Veterinary Medicine. Her time spent in clinical practice treating equine athletes for sports injuries motivated her to search for ways to treat and prevent osteoarthritis.

“Just like human athletes,” Delco said, “horses are particularly prone to injury-related arthritis. In human athletes, the disease is often career-ending. In our patients, it can be life-threatening.”

While the prevalence of osteoarthritis continues to rise, current drugs target only  the symptoms, not the underlying disease itself. “Forget preventing osteoarthritis,” she said, “right now we don’t have a single drug that even slows down progression of the disease.”

In younger individuals and athletes, arthritis typically develops following joint trauma. But how injury to the cartilage surface is translated into an ongoing degenerative process has been unclear. Delco believes mitochondria, the “battery pack” of the cell, are key mediators of this injury-to-disease cascade, but there was no direct evidence for that role.

Now, Delco and colleagues in biomedical engineering and physics have found that mitochondria are a linchpin in the body’s response to injury. They’ve also

found a drug that can interrupt the injury response.

That drug, SS-31, was developed by Dr. Hazel Szeto, Ph.D. ’77, former professor of pharmacology at Weill Cornell Medicine and a co-author of the paper. SS-31 is known to protect and heal mitochondria in other parts of the body.

Delco and her CVM colleagues were the first to explore its effects in cartilage, and revealed in an earlier study that SS-31 helped protect injured chondrocytes days after an injury. Delco wanted to further understand how mitochondria respond to injury, and how SS-31 might protect cells.

“Since osteoarthritis is caused by both biological and mechanical factors,” she said, “we need to evaluate them simultaneously to understand what is happening during injury.”

To do this, the team developed a novel experimental setup, one that allowed them to observe and compare huge numbers of cartilage cells and their mitochondria during and immediately after injury.

“Typically, to study mitochondria, researchers crush up the tissue and isolate the cells or individual mitochondria,” Delco said. “But to study the effects of tissue injury, we needed to monitor mitochondrial function in cells within the dense cartilage matrix during a rapid impact. We also had to track the fate of thousands of individual cells over time.”

To do this, Delco used a custom-made, spring-loaded piston that was developed with Dr. Lawrence Bonassar, the Daljit S. and Elaine Sarkaria Professor in Biomedical Engineering, and Dr. Itai Cohen, professor of physics in the College of Arts and Sciences. The device, designed to sit on a confocal microscope stage, delivers a single, high-speed impact to cartilage samples. To visualize the

physiological effect of injury on cells and their mitochondria, the team used special dyes that indicate if mitochondria are healthy or dysfunctional, and if cells are alive or dead.

Next, the team needed to observe the real-time effects of injury on cartilage – which presented an experimental challenge. “We needed to collect data at rates of roughly 1,000 points per second and with micron-scale spatial resolution,” Delco said.

Delco and her collaborators captured and analyzed these myriad digital images and videos during impact with the help of Lena Bartell, Ph.D. ’18, a former member of Cohen’s lab and first author on the paper.

“Lena’s expertise in image analysis, statistical modeling and machine learning was instrumental in this study,” Delco said. “That’s the power of our collaboration – every contributor to this study brought a completely different skill set and perspective. Together, we got new insights into these very early events that initiate disease.”

Cohen seconded this view. " That’s the whole point or radical collaboration," he said. "It takes the expertise that ranges across the campus and brings it together to do something that neither group could do on their own."

Using their newly developed injury-imaging system, the experiment yielded insights into the fate of individual cells during impact.

“We discovered that in control samples, mitochondrial dysfunction is immediate after injury,” Delco said. “The organelles are responding to the mechanical forces of the impact. They become depolarized – like a discharged battery, they can no longer drive energy production. They also become swollen and lose their tightly folded inner membrane structure.”

In contrast, the mitochondria in SS-31-treated cartilage maintained their normal, healthy form; dramatically fewer cells died compared with the control samples. “Treated samples looked very similar to those that hadn’t been injured at all,” Delco said.

While SS-31’s mechanism of action is not completely known, scientists do know that the peptide enables mitochondria to maintain membrane structure and function during various types of cellular injury – referred to as “mitoprotection.”

“Our finding that SS-31 has this protective effect after mechanical injury is exciting,” says Delco. “It suggests mitoprotection may be a new strategy for preventing arthritis after joint trauma.”

This story also appears in the Cornell Chronicle