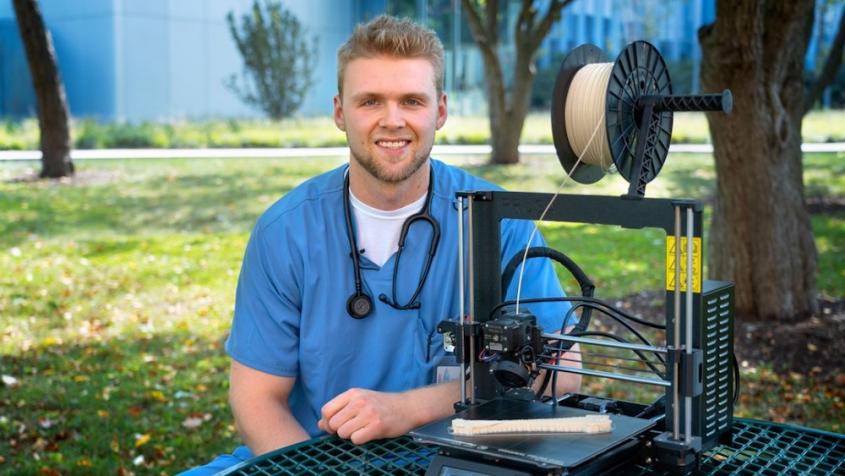 Sean Bellefeuille, a first-year student in the College of Veterinary Medicine, plans to launch a startup that produces anatomical models of animals with a 3D printer. Photo: John Munson/Cornell University

Sean Bellefeuille was an undergraduate studying biomedical engineering in upstate New York when he got an unusual request in fall 2017. An emergency veterinary hospital near Rochester, New York, was facing a difficult orthopedic case. A medium-sized dog named Winston had a rare deformity in his femur that needed surgery. The surgeon reached out to the biomedical engineering department at Rochester Institute of Technology (RIT), where Bellefeuille was a junior, in hope of assistance.

To prepare for the procedure, the surgeon wanted to examine a 3D-printed anatomical model of the bone.

“The department funneled it down to me and a couple other students who worked with 3D printing,” says Bellefeuille, now a first-year student at Cornell’s College of Veterinary Medicine (CVM). “Without knowing how, we said, ‘Sure, we’ll do it.’”

That can-do decision sparked in Bellefeuille an interest in veterinary medicine – and an idea for a 3D printing company that creates veterinary anatomical models.

Bellefeuille had joined a club at RIT that specializes in the technology, working with organizations that help provide custom, 3D-printed prosthetics to children with amputations. “That’s where I learned the basics of design and printing,” he says.

He continued an in-depth exploration of the market, and discovered that veterinary medicine held huge potential for 3D printing. Only a handful of companies produce anatomical models and prosthetics for animals, and their products are extremely expensive, Bellefeuille found.

Using a CT scan provided by the veterinarians, he and his colleagues printed a 3D anatomical model of the femur. The students were invited to watch the surgery, during which the surgeon paused and asked to look at the printed femur for reference before making a certain cut.

“That was a big moment,” Bellefeuille says. “It was proof that our 3D-printed anatomical models delivered a real benefit to a veterinarian in a clinical setting. We figured, if this person uses it, there are definitely others who will use it too.”

That was the beginning of M3Dimensions (pronounced “med-dimensions”), Bellefeuille’s startup biomedical 3D-printing company. He is currently working on a business and strategy plan, with an aim of launching in January 2021.

“Our goal is to increase accessibility for 3D-printing technology, 3D models and other types of related tech, such as custom cutting guides and templates to help with surgical cuts,” Bellefeuille says. “We’ve identified a demand for devices that would attach to the bone to assist the orthopedic surgeon in making more accurate cuts.”

This synergy of biomedical engineering and veterinary medicine also inspired Bellefeuille to pursue the veterinary profession. He worked at the same emergency veterinary hospital that had contacted his department at RIT and shadowed the surgeon who used his 3D-printed femur. “I always enjoyed the medical and biological aspects of my undergraduate program,” he says. “And then I saw how open the veterinary medical field was – that there was an opportunity to bring in my engineering knowledge.”

With that career in his sights, CVM became Bellefeuille’s first choice.

“Cornell has always had a great reputation,” he says. “And, being based in Rochester, a lot of the veterinarians I worked with for my business had gone to Cornell and spoke of it highly.”

Cornell also strongly appealed to Bellefeuille thanks to personal connections he made prior to applying.

“I reached out to [Maurice R. and Corinne P. Greenberg Professor of Surgery] Dr. Rory Todhunter, Ph.D. ’92, letting him know of my interest, and he invited me to meet with his surgery team,” Bellefeuille says. “I got to spend a day shadowing them, watched some surgeries; it was really great to start a relationship with a well-established surgeon at Cornell.”

Bellefeuille also got to know Jorge Colón ’92, D.V.M. ’95, senior lecturer with the Center for Veterinary Business and Entrepreneurship, who immediately connected him with the center’s resources and CVM veterinary entrepreneurs, including Drs. Jonathan Cheetham and Rodrigo Bicalho. “It was great to get those connections before starting school,” Bellefeuille says.

Colón says when surgeons have the exact template of the bone they’ll be working on, it’s “a game changer for the ability to understand how exactly they’re going to approach that surgery.”

Bellefeuille plans to pursue veterinary medicine as his primary profession, potentially in a specialty service, while his 3D-printing business supports the work he’ll do as a veterinarian.

“I’m so excited to learn anatomy and to get that real hands-on knowledge,” he says. “I definitely want to incorporate 3D printing into whatever I’m doing.”

This article appeared in the Cornell Chronicle and is adapted from the original, “Passion for 3D printing and veterinary medicine leads first-year student to Cornell,” by Lauren Cahoon Roberts, assistant director of communications at the College of Veterinary Medicine.