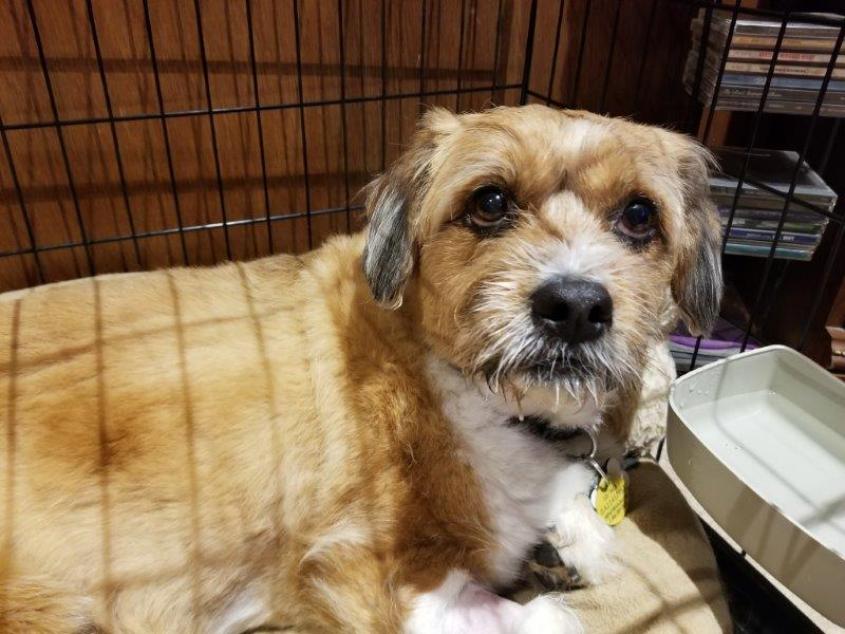 Tanner’s saga started in April 2019, when he stopped eating and drinking, and was suddenly unable to use his back legs. All photos in this story provided.

Although small in stature, Tanner and Gidgie are two adventurous pups that enjoy hiking and exploring with their family, the Seidels. Unfortunately, a medical condition unites them as well — each is in recovery from painful spinal issues, thanks to the neurology service at the Cornell University Hospital for Animals.

Tanner’s saga started in April 2019, when he stopped eating and drinking, and was suddenly unable to use his back legs. The Seidels rushed the 10-year-old Corgi/terrier mix to Cornell, where veterinarians in the neurology service discovered a slipped disc.

Neurology resident Dr. Laura Scoda, now a graduate of the neurology program, and Dr. Jonathan Wood, assistant clinical professor, discussed Tanner’s case and outlined the options and success rates for his family. In this case, surgery was the best course of action. The neurology team prepped Tanner and quickly moved to the operating room for decompressive back surgery.

Discs are important parts of the spine that provide support and cushion between vertebrae. They wear and tear over time as animals age. When one 'slips,' it means the disc’s casing has worn or cracked, allowing the softer inside portion to slip through. As in humans, a slipped disc can be painful for dogs.

Tanner’s surgery went well, and soon he was home with the Seidels.

“While Tanner was hospitalized, the Cornell neuro team called to update us twice a day. We were given clear home instructions and follow up,” said Duane Seidel. “A 100% success story. Now, over two years later, he has vacationed and hiked in several more states, and continues to enjoy his life full of adventure and free of pain.”

As Tanner improved, however, his sibling Gidgie was starting to have spinal issues of her own. The day before Easter 2021, the Seidel family arrived at their local emergency veterinarian thinking the 14-year-old Shi Tzu mix might have broken her neck falling out of bed. Gidgie was then transferred to Cornell, who diagnosed her with a neurological issue likely due to the fall. She then went on crate rest and a course of steroids.

Her condition didn’t improve, however. She developed what looked like hour-long seizures, and still had trouble walking. The Seidels brought Gidgie back to the neurology service, where neurology resident Dr. Patricia Lawler and Wood examined her.

“We found that those seizures were actually pain-induced shaking and an inability to move,” Wood said.

“Her neuro doctor and the team gave us clear choices and we made the decision for an MRI, which they performed that same afternoon,” Tina Seidel said.

The MRI results showed a disc causing compression between the second and third vertebrae in Gidgie’s neck. Since her various other test results came back healthy, the neurology service recommended surgery, which happened the next day. During surgery, the veterinarians used a ventral approach, meaning they approached the problem area from beneath the chin rather than from the back of the neck.

Because of coronavirus pandemic restrictions, the Seidels were unable to be inside the hospital with Gidgie. “The entire process was remote from the parking lot due to the pandemic, and with the Cornell neurological department’s attention to detail, compassion and the clear information provided, we remained confident in making the decisions throughout this process,” Duane Seidel said.

As with Tanner’s surgery, Gidgie’s was also a success. In recovery, her care team updated the Seidels often. “They brought the phone to her and let her hear our voices, which meant the world to us at that point in time,” Tina Seidel said.

Just weeks later, Gidgie was no longer falling over, and she was able to stand and walk on her own without her front paws collapsing. She hasn’t cried in pain since before surgery, and the Seidels say they are already seeing her quality of life improve.

“Gidgie hiked in 21 states and loves the outdoors,” Duane Seidel said. “The Cornell neuro team is affording her more adventures.”

Now both Tanner and Gidgie can continue those adventures together free of pain.

Said Tina Seidel, “We selected Cornell and their neurological department, we stay true to that choice and made the best decision.”

Learn more about the neurology service at their website here.